At least since June 2018, when President Trump tweeted about his “absolute right to PARDON myself,” it’s been a live possibility that our 45th president will do what no president—even desperate, drunk Richard Nixon in his final days—was crazy enough to do. And as the final hours of the Trump presidency tick by, we’re coming down to the wire. 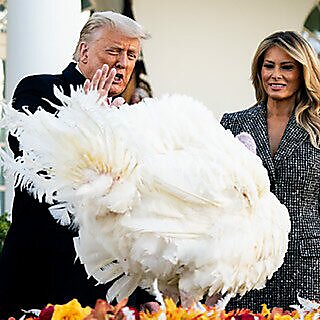 Word is that Trump is set to issue anywhere from 60 to 100 clemency actions today, to a group that includes “white collar criminals, high‐​profile rappers and others but—as of now—is not expected to include Trump himself.”

They’d never admit it, but my suspicion is that a lot of law professors will be secretly disappointed. For a guy who’s not sure how many articles there are in the Constitution, Donald Trump is like a walking con‐​law exam, throwing out gonzo hypotheticals and cases of first impression like it’s his job. Still, it’s probably for the best if he doesn’t attempt a self‐​pardon.

The case that such a power exists is pretty weak, after all. For some reason, though, that doesn’t stop unitary executive fetishists from insisting it’s (harumph) VERY CLEAR. Their arguments tend to gloss over the textual and historical evidence to the contrary, and boil down to: hey, it doesn’t explicitly say you can’t!

But as Michigan State University law prof Brian Kalt, author of the definitive case against presidential self‐​pardons, suggests, the pardon power “is limited by the meaning of the word ‘pardon’ itself.” A pardon is inherently bilateral: it implies a donor and a recipient. “It makes no sense to talk of donating a kidney or $100 to yourself.” And, as I discuss here, the historical evidence that the Framers even recognized the possibility is thin as well.

In any event, if Trump doesn’t try to do himself the favor on his last day, it obviously won’t be because constitutional scruples stayed his hand. Instead, it’ll be the practical reasons that counsel against it. Here’s one I hadn’t thought of until recently: just how would the clemency grant be phrased? As former DOJ pardon attorney Kristin Hucek points out in Politico, such an act of constitutional solipsism would have to be “very strangely worded … he would have to refer to himself in the third person and then sign it.” The inherent awkwardness that entails might not deter the president for whom “shamelessness is a superpower.” But the possibility that prosecutors would react to it like a bull to a red cape just might.

I’ve long thought that the only legally bulletproof way to accomplish a self‐​pardon was to get your veep to do the dirty work for you. It’s a path suggested by the otherwise unconvincing August 5, 1974 Office of Legal Counsel memo drafted in Nixon’s final days:

How this would work is: Trump would notify Congress under Section 3 that he was temporarily “unable to discharge the powers and duties of his office,” tag Mike Pence in as “Acting President,” then Pence pardons him without any of the complications accompanying an attempted self‐​pardon.

Unfortunately for Trump, even the otherwise‐​reliably servile Mike Pence has his limits, something the president himself has apparently begun to recognize. According to CNN, Trump has lately bristled at Nixon comparisons:

He told one adviser during an expletive‐​laden conversation recently never to bring up the ex‐​president ever again. During the passing mention of resigning this week, Trump told people he couldn’t count on Vice President Mike Pence to pardon him like Gerald Ford did Nixon, anyway.

Right: if what Trump really wanted was for Pence to pardon him via the 25th Amendment switcheroo, it’s just possible that it was a bad idea for the president to tweet up a lynch mob that forced the veep, his wife, and his daughter to flee the Senate chamber and hide with only a few Secret Service agents between the Pence family and said mob, some 100 feet away.

I swear, sometimes you get the sense that Donald Trump was never playing 5D chess.