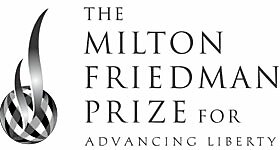 Last month Cato On Campus announced a student essay contest for free tickets to the Friedman Prize for Advancing Liberty dinner, which will honor Iranian journalist Akbar Ganji this week.

In 500 words or less, responders answered the question, "In light of the selection of Akbar Ganji for the receipt of the 2010 Friedman Prize for Advancing Liberty, who would you nominate for a second prize this year and why?"

Students from around the world sent replies.  Topics ranged from Russian labor camp dissidents to U.S. politician Ron Paul; from economics professors to space exploration; from free markets in charity to an individualist psychiatrist.  A common thread that ran throughout all of the entries was entrepreneurial spirit and a unwavering value of individual liberty.

Yasmin Green, an International Studies M.A. student at St. John Fisher College, who wrote about George Ayittey, an advocate of liberty through social entrepreneurship in Africa.  "A man who believes that ‘Africa is poor because she is not free,' Ayittey has worked to promote ideas and institutions that are consistent with the achievement of liberty, and individual rights," wrote Green.

Joseph Hammond, a Middle East History M.A. student from California State University - Long Beach, who the Iranian protesters after the 2009 election.  Hammond advocated that the many Iranians who demonstrated their dedication to becoming politcally recognized would be a "perfect compliment to Akbar Ganji."

Liya Palagashvili, an Economics B.A. student at George Mason University, who identified economist Peter Boettke as an economist serving in the tradition of Milton Friedman. "In the classroom, Dr. Boettke advances his students in the ideas of liberty," she wrote. "Outside of the classroom, Dr. Boettke inspires liberty through his writing," which "is influential in providing a thorough understanding of liberty and the consequences of a nation that violates liberty."

Congratulations to all the winners. If you're a student and want to get more involved, check out Cato On Campus.