Federal spending will rise more than 7 percent this year and annual deficits will soon top $1 trillion. The government’s rising debt could generate a major financial and economic crisis. Members of Congress know about these problems and may feel uncomfortable about loading $22 trillion of debt onto young people.


But Congress is not taking any action to address overspending and debt. The Republican president rarely addresses the issue and most congressional Republicans follow his lead. As for Democrats, they seem consumed by their political battles with the president and do not focus on fiscal restraint.


What about the Freedom Caucus? These are 32 House Republicans whose raison d’etre is cutting the government. If anyone in Congress is focused on the deficit problem and pushing spending cuts, it should be these folks.


My intern, David Titus, and I examined the congressional websites of Freedom Caucus members hoping to find discussions about deficits and proposals for cuts. But we found little about those topics on member websites. We looked through the “issues” and “about” parts of member websites and we examined member press releases back to January 2017.


Some Freedom Caucus members are leaders of government restraint in areas such as foreign policy and civil liberties. But on spending cuts, most members have little to say, at least on their official websites.


The table below tallies the number of different programs Freedom Caucus members identify to cut or reform on their websites, and it tallies the number of general statements about the need for spending cuts. We summed these two items for an overall score. We think we counted fairly but don’t claim scientific precision. This is a rough tally.


The federal government runs 2,300 different subsidy or benefit programs. Yet, on average, Freedom Caucus members only mention four that they want to cut or reform. For example, Rep. Morgan Griffith suggests reforms to Medicaid, food stamps, flood insurance, and Obamacare. Some members only identify smaller programs to cut, such as Planned Parenthood.


On average, member websites include just three general statements about overspending. For example, Rep. Justin Amash says he “believes government overspending is one of the biggest threats to our economic health and national security, and he has introduced an innovative balanced budget amendment.” Amash identifies one program to cut, the Export‐​Import Bank. 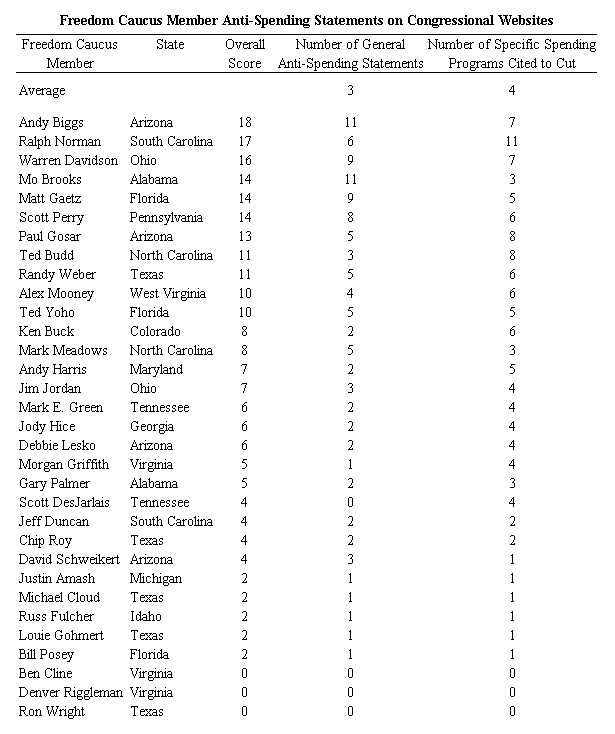 Member websites are just one way that members interact with the public. They also talk to reporters, speak at hearings, and use social media. It is also true that the Republican Study Committee has proposed detailed spending reforms here.


However, as Amash says, “overspending is one of the biggest threats.” As such, every concerned member of Congress should be using their websites to inform the public about the threat and proposing detailed and specific solutions.


A Freedom Caucus member might say, “I’d like to cut many specific programs, but since those reforms wouldn’t get through the House or Senate, I won’t stick my neck out.” But that creates a vicious cycle. We won’t get momentum to pass cuts if members don’t propose them and push them. And if members don’t push specific cuts, the media won’t report on them and we won’t move the public discussion forward.


President Trump has proposed substantial cuts in his annual budgets. Those proposals are often discussed in the media for a while before they die. Why do Trump’s proposed cuts die? Because Republicans don’t defend and advance them on Capitol Hill. I noted here, for example, that Trump’s proposed cuts often don’t garner support from GOP members in committee hearings.


Many Freedom Caucus members have good voting records from a small‐​government perspective. But we also need them—and other members concerned about deficits—to press for specific spending cuts. Members can find cut ideas at Downsizing Government and in the Heritage Foundation’s Blueprint for Balance publication.