Portman, from Ohio, said the Pacific trade deal fails to meet the needs of his state's workers because it lacks an enforceable provision to fight currency manipulation and because of new, less-stringent country-of-origin rules for auto parts.

"I cannot support the TPP in its current form because it doesn't provide that level playing field," Portman said in a statement.

The announcement is significant because passage of the TPP will rely on broad Republican support and because Senator Portman’s credentials (as former USTR and member of the Senate Finance Committee who represents a traditionally trade-skeptic region of the country) have earned him a prominent voice on trade policy in Washington.

The announcement is also noteworthy because the rhetoric and reasons the Senator used to support his opposition are completely at odds with his strong voting record on trade in Congress.  According to Cato’s online trade votes database, Senator Portman is a solid “Free Trader” 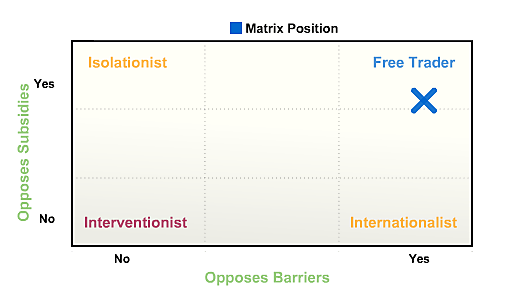 The Senator’s antagonistic position on the TPP is almost certainly related to the fact that he is up for reelection this year.  Ohio is well-known hotbed for trade restrictionist sentiment.  Portman’s fellow Senator is Democrat Sherrod Brown, one of the most active advocates for interventionist trade policy in Congress today.  The current governor of Ohio is Republican presidential candidate John Kasich, who recently spoke about the importance of antidumping tariffs to help the steel industry.  In short, Portman faces political realities that limit his ability to support economically-sound trade policy.

Other Republicans who have come out against the TPP have largely justified their opposition through reasons unrelated to the value of free trade.  They have relied on partisan distrust of Obama, vague constitutional objections to fast track, or conspiracy theories related to immigration.

Portman, on the other hand, has gone full protectionist.  His concern for foreign currency manipulation and rules of origin reveal a close relationship between his position on trade and the interests of Detroit automakers.

Rules of origin lay out how much of a product’s content or value must be produced within TPP countries for that product to qualify for tariff-free treatment under the agreement.  Liberal rules of origin are generally controversial (among people who don’t understand the benefits of unilateral free trade) because they allow other countries (China) to benefit from trade liberalization without making commitments of their own.

Strict rules of origin, however, make preferential trade agreements like the TPP less valuable economically by restricting the development of global supply chains.  Rules of origin are also an excellent opportunity for rent-seeking by industries that want the agreement to privilege their supply chain arrangement over those of their competitors.  Specifically, strict rules of origin in the TPP will impose a greater burden on Japanese automakers than on Detroit automakers.

It’s easy to blame local politics for a politician’s unprincipled stances on trade.  But Portman’s awful rhetoric reveals an inability to make a compelling case for good economic policy or an honest adherence to illiberal economic ideology.  Explaining his opposition to the TPP on purely protectionist grounds represents a missed opportunity to say correct things about the value of trade.

The decline in U.S. manufacturing employment is part of our development into a wealthier, service-oriented economy.  It is progress.  Senator Portman’s pandering to protectionists won’t bring manufacturing jobs back to Ohio, but it will contribute to the efforts of special interests to keep prices high for consumers and reduce economic growth by limiting our freedom to trade in an open, global economy.