The chart below shows federal spending in three component parts over the last five decades. It includes Obama’s proposed spending in 2011. Here are a few thoughts on the recent spending trends:


Interest: The Federal Reserve’s easy money policies reduced federal interest payments in recent years. That is coming to an end. Obama’s budget shows that interest payments will start rising rapidly next year and hit 3 percent of GDP by 2015. And that’s an optimistic projection.


Nondefense: This category includes all other federal spending. After a steady decline during the Clinton years to 12.9 percent of GDP, President Bush pushed up nondefense spending to a higher plateau of around 14.5 percent. Then came the recession and financial crisis, and the Bush‐​Obama tag team hiked spending to an even higher level of around 19 percent of GDP. That level of nondefense spending is almost double the level in 1970 measured as a share of the economy. 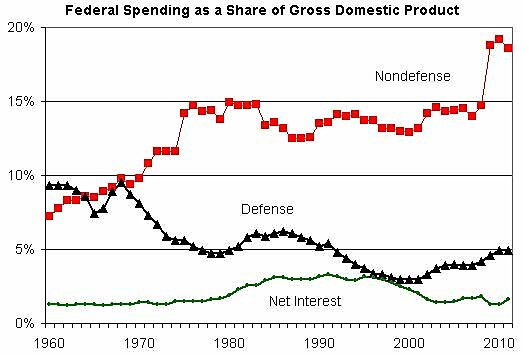