The Obama fiscal commission’s draft report suggested that federal spending be reduced from 25.1% of GDP today to 22% by 2020, and lower after that. That’s a reasonable goal for a centrist kind of commission, but let’s remember that spending was just 18.2% in President Clinton’s last two fiscal years, 2000 and 2001.


For the final report, the commission’s staff might look to Clinton’s budgets for guidance. The chart shows federal spending as a share of GDP in fiscal 2001 and fiscal 2012. Fiscal 2001 was Clinton’s last year, and it was before all of President Bush and Obama’s spending increases. I choose 2012 as the end year because most of the “stimulus” spending will be finished by then, defense is supposed be down a bit as foreign troops are partly withdrawn, and the economy will have hopefully recovered. Based on President Obama’s Mid‐​Session Review, spending in fiscal 2012 will be 23.0% of GDP. 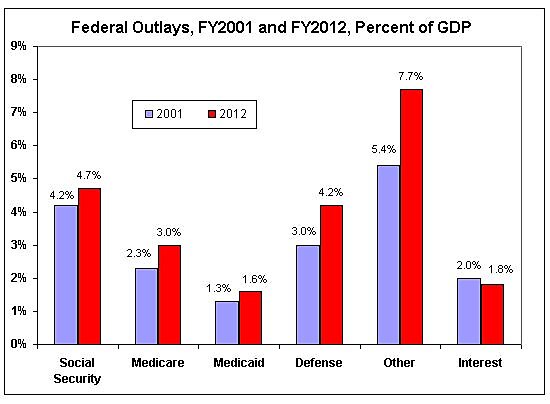 Total federal spending is expected to increase 4.8 percentage points of GDP between 2001 and 2012. The chart shows that increases have occurred in every part of the budget–entitlements, defense, and domestic spending. Thus, the Obama fiscal commission is on the right track to propose cuts across all areas of the budget. However, it needs to be about 4 percentage points of GDP more aggressive in downsizing the government to get us down to Clinton‐​level spending.