The Joint Committee on Taxation (JCT) has released its distributional analysis of the final Republican tax bill. The bill provides even larger percentage cuts for middle earners than previous versions of the legislation.


If the legislation is enacted, higher earners will pay an even larger share of the overall income tax burden than they do now. Our highly “progressive” income tax will be even more progressive. That approach is counter to sound fiscal governance and undermines the growth potential of tax reform, but that is what Republicans are delivering.


Looking at JCT’s table for 2019, second column, the percentage cuts are roughly similar across income groups from $20,000 to $1,000,000. But the JCT table slants the results by including payroll and excise taxes. The table under‐​measures the percentage cuts to the middle compared to the top. 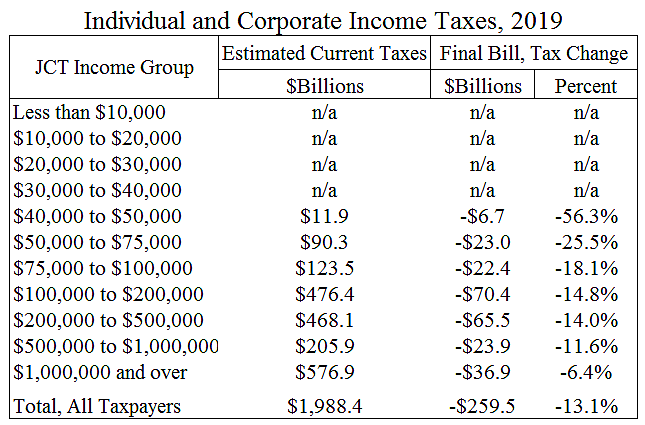 Data Notes: Households less than $40,000 are shown as “n/​a” because they do not pay income taxes in aggregate. JCT does not appear to publish current law estimates of individual and corporate income taxes only for 2019, so I estimated them using ratios from this TPC table.