The Economic Policy Institute is at it again, asserting itself as an unrivaled purveyor of economic nonsense. Every year, the labor‐​sponsored lobbying shop produces a sensational report, which presumes to measure the deleterious impact of trade with China on U.S. employment. And every year those figures become scripture to the likes of Sen. Sherrod Brown and Rep. Mike Michaud, in their efforts to make Americans less free to choose how and with whom to transact.


This year’s takeaway is: “Growing U.S. trade deficit with China cost 2.8 million jobs between 2001 and 2010.” In the report summary on EPI’s homepage, author Robert Scott makes the following claim: “Increases in U.S. exports tend to create jobs in the United States, and increases in imports tend to lead to job loss. Thus, a growing trade deficit signifies growing job loss.”


Well, that might be true…but for the fact that it’s demonstrably false.


As the chart below (which is based on easily verifiable figures published in the Economic Report of the President) reveals, the trade deficit and job creation appear to be positively correlated. When the deficit rises, employment increases; when the deficit shrinks, employment declines. So, right off the bat, a central premise of Scott’s analysis is in doubt. 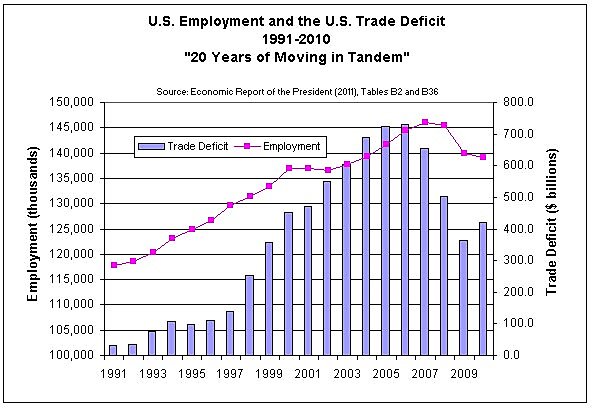 Beyond that problem, EPI’s methodology is not taken seriously by most economists because, for one, it approximates job gains from export value and job losses from import value, as though there were a straight line correlation between the figures. There’s not. And it pretends that imports do not create or support U.S. jobs, which is clearly wrong. After all, U.S. producers — purchasing raw materials, components and capital equipment — accounted for more than half of the value of all U.S. imports last year ($1.05 trillion). In other words, the majority of U.S. imports support U.S. economic activity, which is the basis of U.S. employment. Yet EPI’s methodology counts those imports as jobs‐​reducing.


Last month, the U.S. International Trade Commission published its seventh update to the “The Economic Effects of Significant U.S. Import Restraints” study, which contains a special section on global supply chains. On page xv of the executive summary is a table that not only raises more serious doubts about EPI’s methodology, but should put to rest once and for all the hyperbole employed and anxiety caused by alarmist public relations campaigns and the politicians they serve.


Furthermore, that same table reveals that U.S. value added accounts for 89 percent of total U.S. consumption (a figure that confirms the findings in a recent San Francisco Federal Reserve study), which means that foreign value‐​added accounts for just 11 percent of U.S. consumption, making the United States a fairly closed economy—or at least, a relatively non‐​integrated economy. And China? Well, China only accounts for a measly 0.9 percent of the goods and services consumed in the United States. So, if 2.8 million U.S. jobs were lost to a country that produces less than one percent of what Americans consume, I say its about time we shed those highly inefficient jobs that have been a drag on the U.S. economy. The fact is, however, that 2.8 million is a fiction.


EPI’s jobs loss figures also fail to reflect the fact that the U.S. capital account surplus – the flip side of the current account deficit – is a considerable source of U.S. employment. Foreign investment in U.S. plants, property, hotels, equities, debt, and other assets provide employment for millions of Americans in much the same way that U.S. exports do.


Yes, the 2.8 million job loss figure is a fiction, concocted to support political talking points and a narrow agenda that distract the public from the real problems that ail our economy. Some Chinese government policies are genuine causes for concern, worthy of efforts to resolve, but we limit our capacity to address the real problems effectively when every last gripe becomes a call to arms.