People shopping around on the insurance exchanges when the Affordable Care Act’s Open Enrollment period begins next week will find that the choices they have are limited and that insurance premiums have gone up significantly. A new brief from the Department of Health and Human Services reports an average increase of 22 percent for benchmark plans, and consumers in some states will face hikes as high as 116 percent in Arizona.

The high profile exits of Aetna and UnitedHealth were covered at the time, but the report gives new insights into the aggregate effects of smaller exits and discontinuations as well. In the states included in the HHS brief, there was a net reduction of 73 issuers from last year, with Iowa and Maine being the only states to see a net increase in the number of issuers.

As might be expected, this significant drop in the number of issuers has led to a corresponding reduction in the number of choices available to consumers in most states. The trend prior to this year had been a reduction in the number of counties with only one insurer, but that quintupled this year in the wake of insurer exits, from 182 last year to 960 this year according to calculations by Sarah Frostenson.  In this year’s open enrollment 21 percent of the consumers in the 38 states the HHS brief included only had one issuer to choose from, and only 56 percent had three or more. The weighted average number of qualified health plans to choose from in a county dropped from 47 to 30.

Number of Issuers by State

Note: Made with Datawrapper.

In the starkest illustration of this lack of choice and competition, 5 states have only one insurer in the entire exchange this year: Alaska, Alabama, Oklahoma, South Carolina, and Wyoming.

Two other states are in virtually the same position. Arizona, which made headlines earlier this year when it looked like Pinal County may end up with zero options on the exchange, has only on insurer in every county but one. North Carolina has only one insurer in 95 percent of its counties.

Many people are increasingly finding that when it comes to the ACA exchanges, there’s not much choice at all. Part of the reason there have been so many insurer withdrawals is that they’ve struggled to find a way to be profitable, or even sustainable, in this sphere. The plans that are remaining are implementing substantial premium increases this year, and in some cases they requested even higher increases in response to other issuers leaving in anticipation of absorbing some of their costly enrollees.

It might not be surprising that the premium increases are even higher in these states as remaining insurers aren’t being forced to compete and trying to reduce premiums as they would if there was more room for the free market here. The premium increase for the benchmark plan was well above the national average in every one of these states except for Wyoming, reaching as high as 69 percent in Oklahoma and an astronomical 116 percent in Arizona. 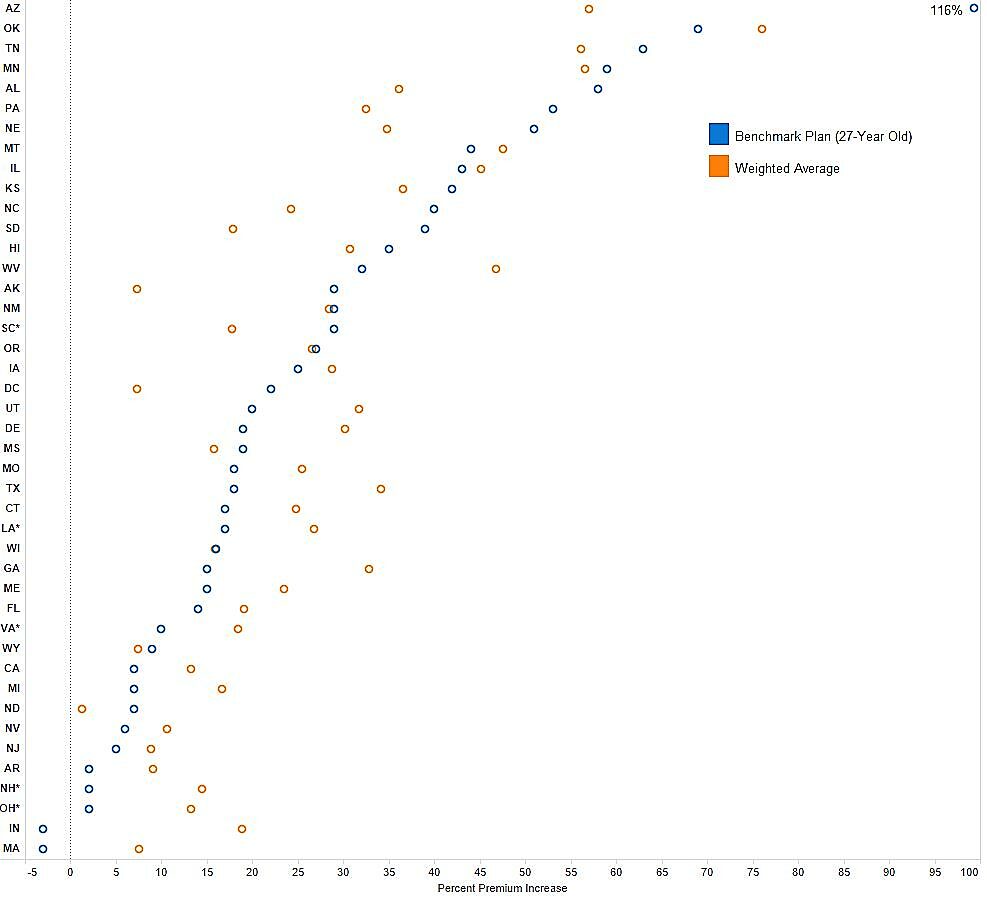 Notes: Only states included in ASPE brief are included in the figure. * is for states with requested but not approved increases. Weighted averages assume enrollees renew existing policies.  Increases listed are prior to any applicable subsidies. For the roughly 1.4 million people who are losing their plan, no estimate for increase as they cannot be assumed to re-enroll. Made with Tableau.

Not everyone has the benchmark plan, some might opt for more comprehensive Gold plans, while others might decide to go with the more affordable Bronze plans, so looking beyond the benchmark increases is also important. The weighted average increase of all plans before subsidies is roughly 25 percent according to estimates from ACASignups.net, with some variations between the sates.

While the majority of enrollees in the ACA exchanges are subsidized, those that are not and people buying plans off-exchange will have to bear the full brunt of these increases, and many of them could find maintaining coverage increasingly difficult, calling into question the ‘Affordable’ part of the law’s name. In Arizona, for example, more than a quarter of on-exchange enrollees last year were unsubsidized, and this share ranges from 9 percent to 32 percent in the states, accounting for millions of people.

Fewer choices and higher premiums are just two of the latest high-profile problems with the law. Their associated costs will feel all too real to millions of people trying to find some kind of coverage that won’t drain their pocketbooks in Open Enrollment next week. The Affordable Care Act has left a series of broken promises in its wake, but the biggest one might be in the name.