I am writing a study on the Federal Emergency Management Agency (FEMA) and looking at the issue of presidential disaster declarations. Under the 1988 Stafford Act, a state governor may request that the president declare a “major disaster” in the state if “the disaster is of such severity and magnitude that effective response is beyond the capabilities of the state and the affected local governments.”


The main purpose of declarations is to impose on federal taxpayers the relief and rebuilding costs that would otherwise fall on state and local taxpayers and individuals in the affected area. Federalism is central to disaster planning and response in the United States, and federal aid is only supposed to be for the most severe events. Unfortunately, the relentless political forces that are centralizing power in just about every policy area are also doing so in disaster policy.


Below is a chart of FEMA data showing the number of “major disasters” declared by presidents since 1974, when the current process was put in place. The number of declared disasters has soared as presidents have sought political advantage in handing out more aid. Presidents have been ignoring the plain language of the Stafford Act, which allows for aid only in the most severe situations.


In the chart, I marked with red bars the years that presidents ran for reelection. In those years, presidents have generally declared the most major disasters. That was true of Ronald Reagan in 1984, George H.W. Bush in 1992, and Bill Clinton in 1996. George W. Bush declared the most disasters of his first term in his reelection year of 2004. The two presidents who do not fit the pattern are Jimmy Carter and Barack Obama. 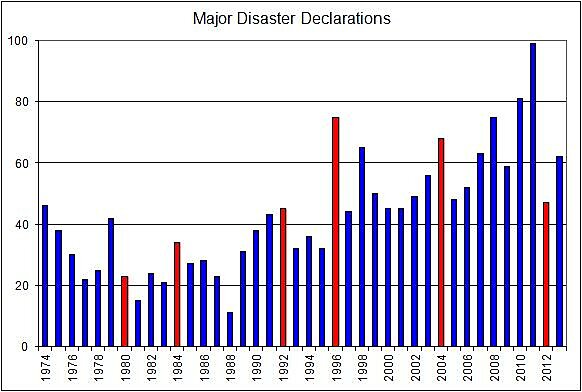