January 22, 2010 is a day that should live in infamy, at least among believers in limited government. On that day, the federal government added its 2,000th subsidy program for individuals, businesses, or state and local governments.


The number of federal subsidy programs soared 21 percent during the 1990s and 40 percent during the 2000s. The entire nation is jumping aboard Washington’s gravy train. My assistant, Amy Mandler, noticed the recent addition of two new Department of Justice programs, and that pushed us over the threshold to reach 2,001.


There is a federal subsidy program for every year that has passed since Emperor Augustus held sway in Rome. We’ve gone from bread and circuses to food stamps, the National Endowment for the Arts, and 1,999 other hand‐​out programs from the imperial city on the Potomac.


Figure 1 shows that the number of federal subsidy programs has almost doubled since the mid‐​1980s after some modest cutbacks under President Ronald Reagan. 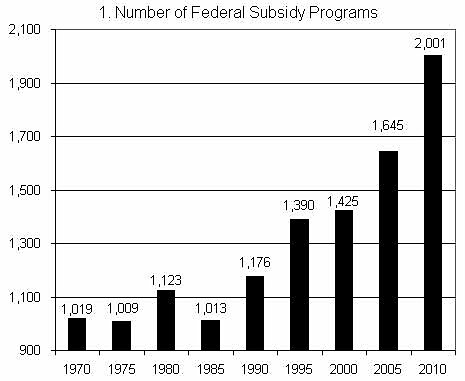 Most people are aware that federal spending is soaring, but the federal government is also increasing the scope of its activities, intervening in many areas that used to be left to state governments, businesses, charities, and individuals. To measure the widening scope, Figure 1 uses the program count from current and past editions of the Catalog of Federal Domestic Assistance. The CFDA is an official compilation of all federal aid programs, including grants, loans, insurance, scholarships, and other types of benefits.


Figure 2 shows the number of subsidy programs listed in the CFDA by federal department. It is a rough guide to the areas in society in which the government is most in violation of federalism—the constitutional principle that the federal government ought not to encroach on activities that are properly state, local, and private.


As the federal octopus extends its tentacles ever further, state governments are becoming no more than regional subdivisions of the national government, businesses and nonprofit groups are becoming tools of the state, and individualism is giving way to a more European desire for cradle‐​to‐​grave dependency.


Yet recent election results indicate that Americans may be starting to wake up and fight back. Whether we are more successful than Cicero and Cato the Younger in battling to retain our limited‐​government republic remains to be seen. 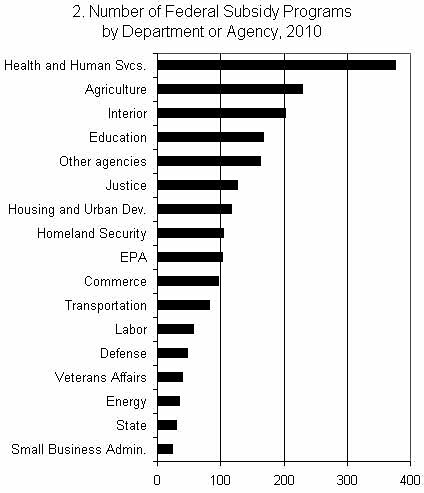