The latest revelations regarding the NSA’s bulk data collection illustrate the vastness of the government’s spying apparatus. That vastness costs taxpayers a lot of money.

The cost of the federal spy budget used to be secret, which was a bizarre thing for a government that is supposed to be of the people, by the people, and for the people. But in recent years, policymakers have taken a step toward transparency and released figures on total intelligence spending.

Even by Washington standards, $68 billion is a lot of money. The chart shows that the spy budget is two-thirds as large as the $96 billion Americans spend on state and local policing activities. And the spy budget is far larger than spending on state and local fire activities ($42 billion), the NASA budget ($17 billion), and the National Park Service budget ($3 billion). (Police and fire data are for 2011; NASA and Park Service data are for 2013.) 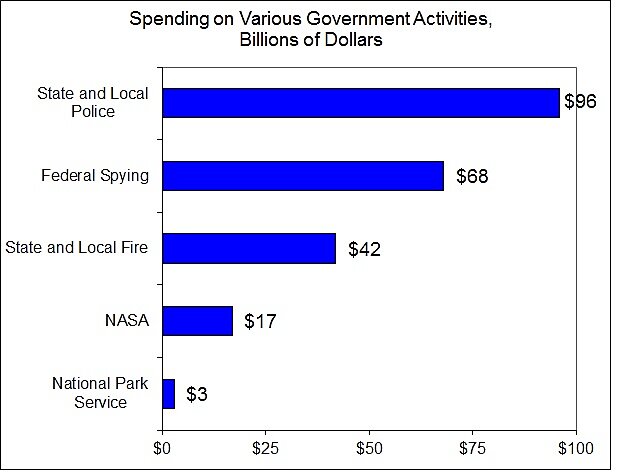 What do the NIP and MIP spend so much money on? I assume it’s mainly the wages and benefits of their skilled workers, plus lots of spending on computers, drones, and other technology.

In an analysis of the spy budget (or “black budget”) last year, the Washington Post found that the NIP and MIP spanned 16 agencies and had 107,000 employees. The largest agency is the CIA with a $15 billion budget and 22,000 employees. Further details are here and here.

I don’t think we know what share of the total $68 billion goes toward worker wages and benefits. Let’s take a wild guess and say that the average compensation of intelligence workers is $200,000. If we apply that figure to the workforce of 107,000, we get a total compensation cost of $21 billion. But that’s less than one-third of the total spy budget. So it appears that the great bulk of the spy budget goes toward procuring goods and services from contractors.

The good news is that the spy budget has come down from a peak in 2010. Further cuts would have the beneficial effect of forcing agencies to better prioritize and hopefully cut some of their excessive data collection activities and most intrusive programs. In many areas of the federal budget, spending and civil liberties can be inversely related. Cato analysts have proposed reducing the spy budget by one-quarter in conjunction with an array of other federal spending cuts.