The Congressional Budget Office and the Office of Management and Budget both project that federal government spending will be about $4.6 trillion in fiscal year 2020.

In fact, federal spending in 2020 will be about $5.2 trillion. Reporters and budget wonks (including me) nearly always use the lower CBO and OMB numbers when discussing total federal spending, but they are the wrong numbers.

The $4.6 trillion figure is “net” outlays, but actual total spending is “gross” outlays at $5.2 trillion. The difference is “offsetting collections” and “offsetting receipts.” These revenues to the government are netted against spending at either the program level, agency level, or government‐​wide level. Some examples are Medicare premiums, national park fees, and royalties earned on mineral deposits. There are hundreds of cash inflows to the government that are deducted from spending before reaching the widely reported net figure.

The details on offsets are buried in chapter 15 of OMB’s Analytical Perspectives, which was released in March. OMB expected 2020 gross spending to be about 12 percent larger than net spending and offsets from the public to be about $560 billion. Thus, gross federal spending will be about $5.2 trillion.

Net outlays in 2020 will be about 21.0 percent of gross domestic product, while gross outlays will be about 23.5 percent. The latter is a better measure of the share of the economy controlled by federal legislators through spending programs.

Politically, reducing federal spending reported to the public with a half trillion in offsets is a sneaky way for Washington to hide some its massive footprint. To increase transparency, CBO and OMB should highlight gross outlays in their main budget tables and charts where the figures would be more visible to reporters and the public. 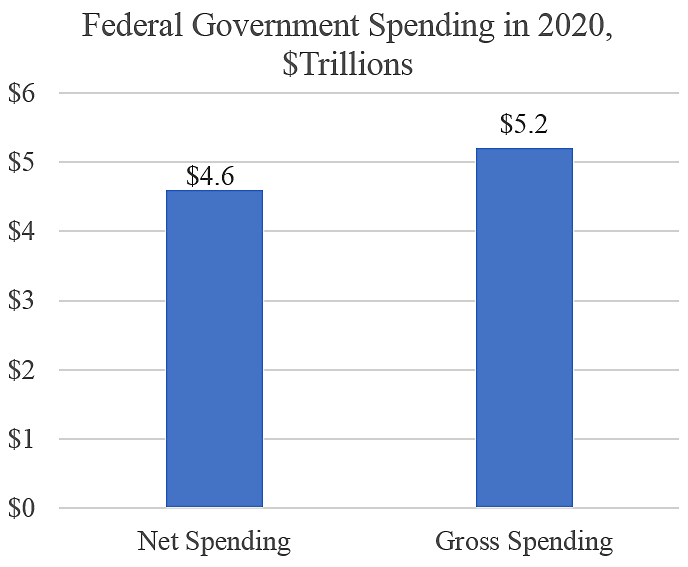