The Federal Reserve vs. Small Business

Given all the attention that the Federal Reserve has garnered for its monetary “stimulus” programs, it’s perplexing to many that the U.S. has been mired in a credit crunch. After all, conventional wisdom tells us that the Fed’s policies, which have lowered interest rates to almost zero, should have stimulated the creation of credit. This has not been the case, and I’m not surprised.

As it turns out, the Fed’s “stimulus” policies are actually exacerbating the credit crunch. Since credit is a source of working capital for businesses, a credit crunch acts like a supply constraint on the economy. This has been the case particularly for smaller firms in the U.S. economy, known as small and medium enterprises (“SMEs”).

To understand the problem, we must delve into the plumbing of the financial system, specifically the loan markets. Retail bank lending involves making risky forward commitments, such as extending a line of credit to a corporate client, for example. The willingness of a bank to make such forward commitments depends, to a large extent, on a well-functioning interbank market – a market operating with positive interest rates and without counterparty risks.

With the availability of such a market, banks can lend to their clients with confidence because they can cover their commitments by bidding for funds in the wholesale interbank market. 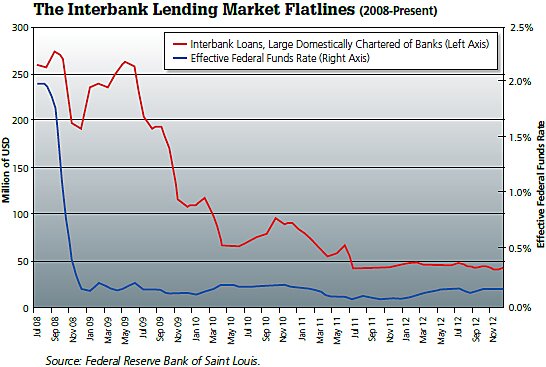 Without the security provided by a reliable interbank lending market, banks have been unwilling to scale up or even retain their forward loan commitments. This was verified in a recent article in Central Banking Journal by Stanford Economist Prof. Ronald McKinnon – appropriately titled “Fed 'stimulus' chokes indirect finance to SMEs.” The result, as Prof. McKinnon puts it, has been “constipation in domestic financial intermediation” – in other words, a credit crunch.

When banks put the brakes on lending, it is small and medium enterprises that are the hardest hit. Whereas large corporate firms can raise funds directly from the market, SMEs are often primarily reliant on bank lending for working capital. The current drought in the interbank market, and associated credit crunch, has thus left many SMEs without a consistent source of funding.

As it turns out, these “small” businesses make up a big chunk of the U.S. economy – 49.2% of private sector employment and 46% of private-sector GDP. Indeed, the untold story is that the zero-interest-rate trap has left SMEs in a financial straightjacket.

In short, the Fed’s zero interest-rate policy has exacerbated a credit crunch that has been holding back the economy. The only way out of this trap is for the Fed to abandon the conventional wisdom that zero-interest-rates stimulate the creation of credit. Suppose the Fed were to raise the Fed funds rate to, say, two percent. This would loosen the screws on interbank lending, and credit would begin to flow more readily to small and medium enterprises.