The public is concerned that governments are providing excessively generous compensation to their workers. Attention has focused on the high salaries and benefits of federal civilian employees and the often lavish pensions paid to state and local workers. 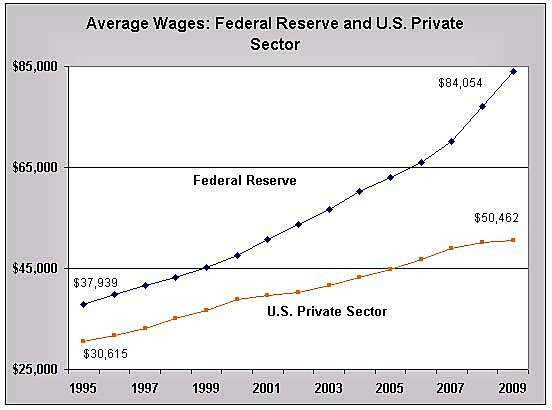 However, there is a major caveat to this Federal Reserve Bank data. Bank employment has fallen from a stable level before 2002 of about 23,000 to just 17,398 in 2009. One reason is that a major Fed activity—check processing—is rapidly declining due to technological changes. Thus, it is likely that many lost Fed jobs were at relatively lower salary levels.

Nonetheless, despite a 26 percent workforce reduction since 1995, overall Fed Bank compensation costs (wages and benefits) have grown just as fast as the overall economy. Fed compensation costs doubled between 1995 and 2009 as U.S. GDP doubled. The Fed’s total current operating expenses—including compensation, buildings, etc—also doubled during this period. (The Fed’s expenses are from this table in its annual reports. I excluded the new “interest on reserves” expense).

In 2009, total average wages and benefits of Fed Bank workers was $124,974, or more than double the $61,051 average compensation in the U.S. private sector. Fed workers have very generous benefits, including rare perks such as subsidized cafeteria meals.

Federal Reserve annual reports are available online back to 1995. But a 1996 report from the Government Accountability Office discussed the fairly rapid rise in Fed operating expenses during the 1988 to 1994 period, thus indicating that rising costs have been an issue for some time.

How does this affect the general public? Rising costs result in fewer central bank profits being transferred to the U.S. Treasury. That means higher federal deficits or taxes. The GAO explains:

As a monopoly immune from competition, the Fed will tend to have a bloated bureaucracy. That makes oversight by Congress very important so that technological efficiencies gained in Fed functions such as check‐​clearing are passed along to taxpayers, and not gobbled up, for example, by rising numbers of high‐​paid officers. As the Congress next year looks for ways to reduce the budget deficit, it should look for cost savings at the Fed.

Policymakers might consider whether the Fed really needs 12 regional bank organizations, each with huge fortress‐​like buildings in cities across the nation. They should ask why the number of high‐​paid “officers” has increased, even as the number of overall Fed workers has fallen. And they should ask whether Fed employees really need such generous benefit packages—including, for example, both a defined contribution and a defined benefit plan.

I’m not convinced that we need a monopoly central bank. But until policymakers explore alternatives such as free banking, they should try to reduce costs at the Fed as they scour the entire budget for savings.