Federal Infrastructure Spending: How About This Boondoggle?


So that citizens know what the president is talking about, they should review the success of the government’s past infrastructure projects. Here’s one to consider: 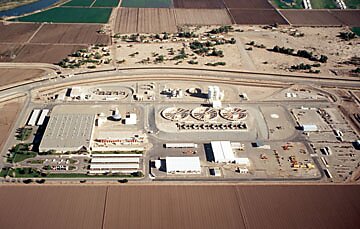 It’s the Yuma Desalting Plant in Arizona, built by the federal Bureau of Reclamation at a taxpayer cost of $245 million. After completing the plant in 1993, Uncle Sam said: “Whoops, we don’t need it after all.” The plant has sat idle for almost two decades, and taxpayers are getting hit for $6 million a year to maintain it.


It gets worse. The purpose of the Yuma plant is to reverse some of the environmental damage done by government‐​subsidized irrigation farming. As irrigation waters reflow back into Western rivers, they boost saline levels and can make the water useless for downstream users. The Yuma plant was supposed to desalinate some of the irrigation flow into the Colorado River, but the government spent more money to build a separate 73‐​mile canal to drain water straight to the ocean.


I imagine that irrigation farming makes economic sense in many places. The problem is that the federal government has vastly subsidized dams and irrigation infrastructure in the West without regard to economics or sound environmental practices. Check out the costly environmental mess created by federal irrigation subsidies in the San Joaquin Valley of California. Or consider the environmental problems in the Florida Everglades caused by federal sugar subsidies and Corps of Engineers infrastructure, which, once again, taxpayers are helping to pay to clean up.


Billions of dollars of infrastructure spending by the Bureau of Reclamation has gone into white elephant projects. Imagining that more federal infrastructure will be a panacea for the economy is a liberal fairy tale, detached from the actual experience of most federal agencies over the last century.