When describing spending growth in federal programs, I often need to use words like “soaring” and “explosive.” But growth in federal health spending is almost beyond superlatives to describe it, and it will increase even faster as a result of President Obama’s new health legislation.


This chart shows total real spending by the Department of Health and Human Services, which includes the Medicare and Medicaid programs. Spending has increased almost nine‐​fold since 1970, and that’s after adjusting for inflation. And note how the slope of the bars increased around 1990. Health spending is truly skyrocketing and Obama has just put us into orbit. 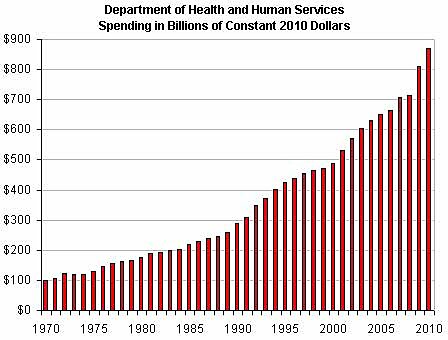 (Data from the federal budget, historical tables, table 4.1, as deflated)