Waste, fraud, and abuse are a common target on the campaign trail. Politicians from both parties point promise that eliminating this problem is a cure-all for whatever mathematical problems their tax and spending proposals might face. Eliminating waste, fraud, and abuse is not controversial, and allows them to avoid naming any actual programs they would phase out or reduce. As my Cato colleagues have pointed out, even completely eliminating all improper payments (which are somewhat related but not quite the same thing) won’t magically make next year’s budget deficit disappear and would do nothing to address the country’s more serious longer-term fiscal issues. Even with that caveat, improper payments are a pervasive and persistent problem, reaching $137 billion in 2015, a new record. Given the persistently high error rates and the outsized problems in government health care programs, it’s very likely that there will be another record high next year. 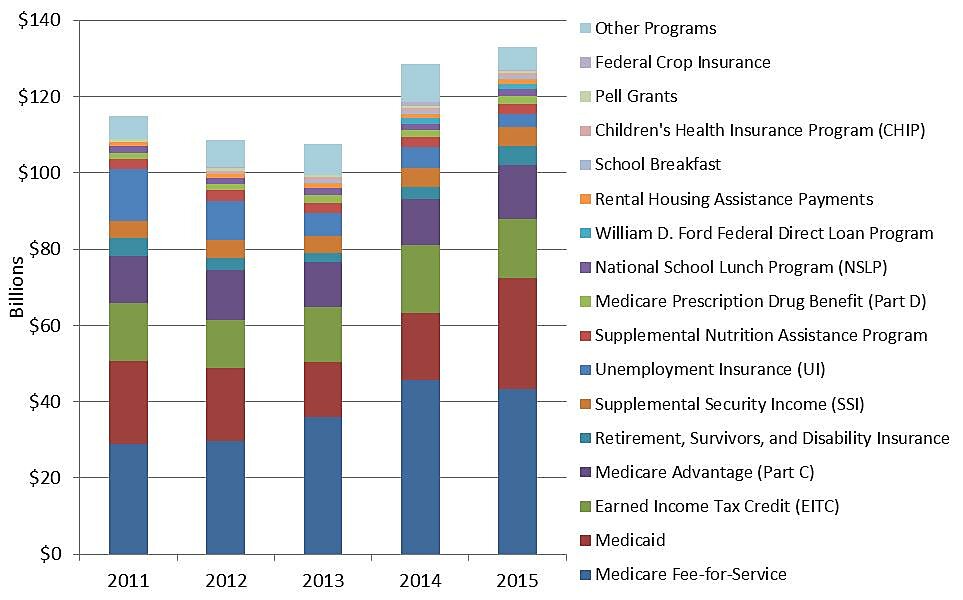 Improper payments are somewhat related to the oft-cited triumvirate of waste, fraud, and abuse. These payments can stem from fraud and abuse, but also misidentification, insufficient documentation, and clerical errors. The vast majority of improper payments are overpayments, 92 percent in 2015, but  a portion of this total does come from underpayments, or payments that are too low according to program rules. These amounts only measure amounts and rates relative to these rules, so say nothing about the effectiveness or propriety of the programs themselves.

If the $137 billion in combined improper payments were one program, it would be almost as large as the Social Security Disability Insurance program. As the figure above illustrates, most of these improper payments are concentrated in a few “high-error” programs. Three of the programs with the biggest improper payment amounts are health care programs, and projected growth in health care spending overall and recent government expansions in this sphere will likely lead to even higher amounts over the next decade. If Medicaid’s error payment rate were to remain constant over the next decade, improper payments in this program alone would be more than $60 billion in 2026.

While the magnitude of these improper payments is a serious concern, it is almost more troubling that they are so persistent, despite repeated efforts to address them. Since 2011, cumulative improper payments totaled almost $600 billion, which is more than total domestic discretionary federal spending last year.

While a few “high-error” programs have seen some progress in reducing improper payment rates, in most cases the rate has been relatively steady over the past five years, and in some instances has even increased. Medicare Fee-for-Service, one of the largest components with $358 billion in total outlays last year, had an improper payment rate over 12 percent the last two years, the highest on record. 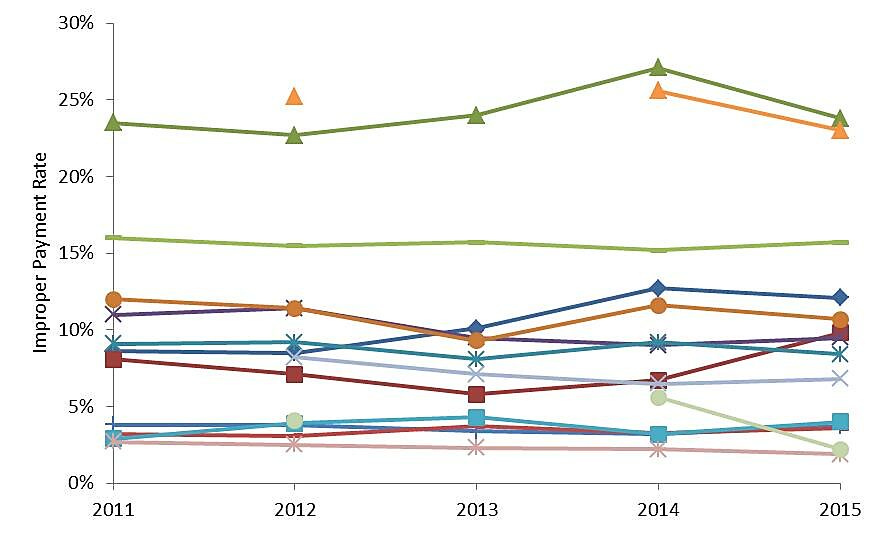 Cutting down the scope of the federal government’s improper payments won’t solve all of our other fiscal problems, but these outlays do represent a significant misallocation and waste of taxpayer money. In many cases, error rates remain stubbornly high even after a program has been identified as one needing additional oversight. It is one thing for a politician to promise they’ll address the persistent improper payment problem, and quite another to actually do it.