Federal Government: Too Big to Manage

One of the themes in my new study, “Why the Federal Government Fails,” is that the federal government has grown too large to manage with any reasonable level of efficiency and competence. Even if politicians worked diligently to advance the general interest, and even if federal bureaucracies focused on delivering quality services, the vast size of the government would still generate failure after failure.

Here’s an astounding fact: the federal government’s 2014 budget of $3.5 trillion was almost 100 times larger than the average state government budget of $36 billion, as shown in the figure. The largest state budget was California’s at $230 billion, but even that flood of spending was only one fifteenth the magnitude of the federal spending tsunami. Total state spending in 2014 was $1.8 trillion, which includes spending on general funds and nongeneral funds. 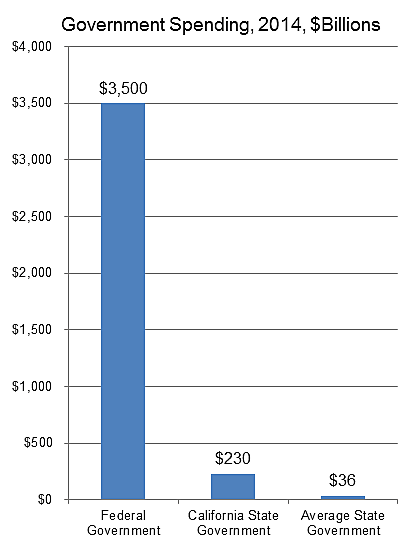 So even if federal officials spent their time diligently scrutinizing programs to prune waste, the job would be simply too large for them. With much of their time spent fundraising, meeting with lobbyists, and giving speeches, members have little time left to study policy, and they routinely miss all or most of their committee hearings. Congress grabs for itself vast powers over nonfederal activities, but then members do not have the time to see that their interventions actually work.

A really sad thing about American democracy is that we are squandering a huge built-in advantage that could greatly improve the nation’s governance. I’m talking about federalism, or allowing local and state governments to handle the great majority of governmental activities. Instead, politicians of both parties, and at all levels, have done their best over the past century to crush federalism and centralize power in Washington.

They have done so for no sound policy reason: centralization benefits politicians, not citizens. Consider that Congress has created hundreds of new federal programs to supposedly help the public since the 1960s. Yet, ironically, polling shows that the public has not grown fonder of the federal government. Quite the opposite, polling shows that Americans have become more alienated from the federal government, and more disgusted by its corruption and dysfunction.

To learn more about the sad realities of our government, see Why the Federal Government Fails.