Federal Government: Much Smaller in Canada

Canada released a new federal budget yesterday. The ruling Conservatives are centrists and far too supportive of the welfare state. Nonetheless, the government is expected to balance the budget next year while steadily reducing spending and debt as a share of GDP.


The contrast with the huge and unreformed federal budget in Washington is stark.


In the United States, federal spending was 20.8 percent of GDP in 2013, and the CBO projects that the ratio will gradually rise to 21.4 percent by 2019. Federal debt held by the public as a share of GDP is 74 percent this year—more than twice the Canadian level.


On federal fiscal policy, Canada has had pragmatic centrist leadership for the last two decades, with voters keeping the loony left out of power. In the United States, we’ve had power divided between centrist Republicans and loony left Democrats in recent years.


Actually, the federal leadership of both U.S. parties is loony. The debt crisis in Europe illustrated that endlessly running large deficits when government debt is already high is dangerous. It is playing with fire. Yet congressional majorities have recently signed off on a big‐​spending appropriations deal, a big‐​spending farm bill, and a debt limit bill that does nothing to combat runaway red ink.


Pundits often claim that the Republicans are controlled by radical Tea Party elements. I wish that were true, but in terms of policy results there is no evidence of it. Republican and Democratic leaders are apparently satisfied with federal spending, deficits, and debt far larger than acceptable to the centrists in Canada.


The chart shows the remarkable gap in federal spending between the two countries in recent years. 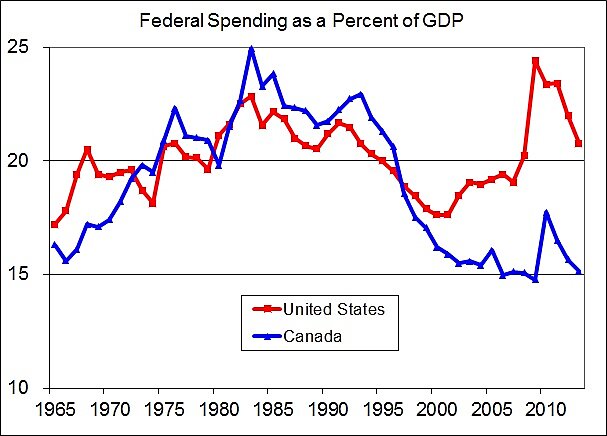