Despite rising federal deficits, Congress is set to pass another budget‐​busting spending bill. This time it is a $19 billion package of disaster‐​related subsidies.


The Washington Post reports “taxpayer spending on U.S. disaster fund explodes.” It documents increases in disaster spending by the Federal Emergency Management Agency (FEMA). In a typical recent year, “spending on the federal disaster relief fund is almost 10 times higher than it was three decades ago, even after adjusting for inflation.”


The story identifies two causes of the spending increases: climate change and population growth in disaster‐​prone areas. But it ignored perhaps the most important cause: increased federal intervention in the sorts of emergencies that used to be handled by the states, as I discuss here.


The Post is correct that more Americans are moving into disaster‐​prone areas:

Many more Americans have moved into harm’s way, with growth exploding in the Gulf Coast region and along the Continental Divide, where tornadoes frequently occur, according to a study on the “expanding bull’s eye effect” by Stephen M. Strader of Villanova University and Walker S. Ashley of Northern Illinois University.


Since 1970, 35 million more people and their homes have moved to coastal shoreline “in the direct path of potentially devastating storm surges,” the researchers found, a 40 percent increase.

More people are also living in fire‐​prone areas of California.


The Post does not explore an important reason why Americans are moving into these areas: government subsidies. Federal subsidies for flood insurance, flood control structures, beach replenishment, and disaster rebuilding have encouraged development in coastal areas, as I discuss here. Meanwhile, state policies have contributed to building in California’s fire‐​prone areas.


In the United States, federalism is supposed to undergird our system of handling disasters, particularly natural disasters. Under the 1988 Stafford Act, the federal government is supposed to get involved in disasters only if they are of “such severity and magnitude that effective response is beyond the capabilities of the state and the affected local governments.”


However, presidents and congresses have increasingly ignored this limit. The number of presidential disaster declarations has soared and the costs of disaster bills have increased as politicians shoe‐​horn subsidies unrelated to immediate emergency response into bills.


Growing federal intervention is undermining the role of the states and private institutions in handling disasters. This intervention stems from politics not practical benefits. State and local governments and the private sector are better positioned to handle most disaster response. Also, states, cities, and private utilities aid each other during disasters.


Rising FEMA spending is not a good metric for measuring the severity of natural disasters striking the United States. Rather, it reflects growing populations living in risky areas and growing disregard for federalism in disaster‐​related response and rebuilding. 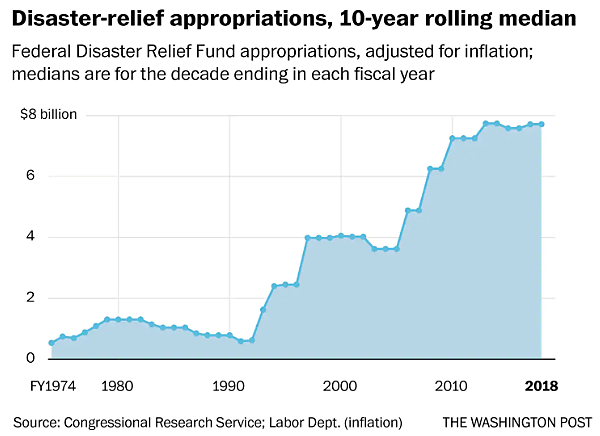