The Congressional Budget Office has released new projections for federal spending and revenues through to 2030.

Federal budget policy is a disaster. The government will spend $4.6 trillion this year, raise $3.6 trillion in tax revenues, and fill the gap with $1 trillion in fresh borrowing. That is like a worker earning $36,000 in income but spending $46,000 and putting $10,000 on credit cards. Maybe he can get away with the excess spending for a while, but eventually his finances will crash.

The CBO’s baseline projections show spending rising faster than revenues in coming years, with the result that annual deficits by 2030 are expected to hit $1.74 trillion. Spending in 2030 at $7.49 trillion will be 30 percent higher than revenues of $5.75 trillion, as shown in the chart below.

Those projections are ugly, but they are optimistic if policymakers do not enact major reforms. One optimistic CBO assumption is that discretionary spending will decline as a share of GDP in coming years, which seems unlikely given that both parties these days push for higher spending. So I’ve included on the chart a “more likely” spending projection that assumes discretionary spending stays at today’s share of GDP.

On the revenue side, CBO includes the expiration of the GOP tax cuts after 2025, but it is likely that some or all of those cuts will be extended. Democrats may agree to extension in return for more low‐​income benefits. So the chart includes a “more likely” revenue line, which assumes the tax cuts are extended, which I roughly calculated by assuming revenues stay at the 2025 share of GDP.

Our economy is growing and we are at peace, so federal deficits and debt should be falling. But deficits are soaring and debt is at record high levels for peacetime as a share of the economy. The outlook is particularly scary because neither party is even talking about spending reforms. We are marching into a fiscal crisis and our elected leaders seem to have no idea how to tackle it and do not even seem to care. 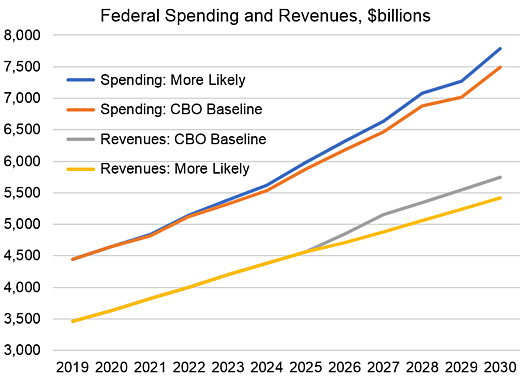