President Trump releases his budget for 2020 today. The budget includes major cuts to domestic programs to deal with rising deficits, which is a good approach because out‐​of‐​control spending is the core problem with federal finances.


Many people blame today’s high deficits on the Trump tax cuts. Pointing to growing red ink, the AP said yesterday, “Trump’s 2017 tax cut bears much of the blame, along with sharp increases in spending for both the Pentagon and domestic agencies and the growing federal retirement costs of the baby boom generation.”


The tax scorekeeper of Congress estimated that the tax cuts would lose substantial revenues, particularly in the near term. But overall federal revenues have not fallen, and indeed are expected to grow strongly in coming years.


The chart below shows annual increases in total federal spending and revenues under CBO’s “alternative fiscal scenario.” The AFS assumes that a portion of the tax cuts do not expire after 2025 as scheduled, and that discretionary budget caps (currently in place through 2021) are lifted, which is likely.


Despite the tax cuts, you can see that 2018 revenues did not fall—they were roughly flat. And now in 2019 revenues are rising strongly and expected to grow at an annual average rate of 4.2 percent over the coming decade. Again, this is with the Trump tax cuts in place through 2029.


The problem is that spending is expected to grow even faster at a 5.4 percent average rate over the coming decade, according to the CBO. That is far above the expected inflation rate of about 2.1 percent in coming years.


As spending rises faster than revenues, deficits will soar. Under the AFS, the CBO expects annual deficits to climb from $0.9 trillion in 2019 to $2.2 trillion by 2029.


America is in the 10th year of economic expansion, so Washington should be running budget surpluses not pushing up deficits to record highs. In his new budget, Trump proposes some unaffordable defense and security spending increases. But he also proposes balancing the budget in 15 years with domestic spending restraint, which is a modest reform goal in the right direction. 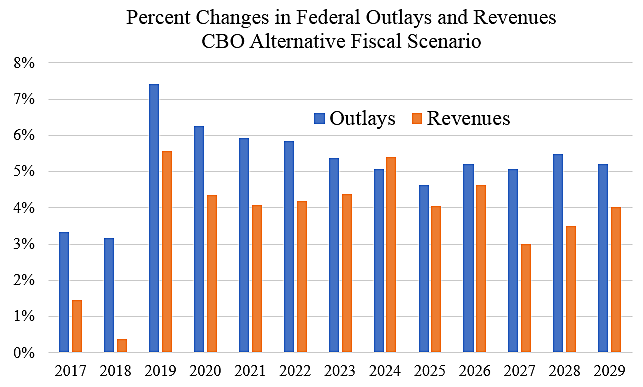