The federal government is approaching its legal borrowing limit, and fiscal conservatives in Congress are wondering what spending reforms they can extract in return for supporting a debt‐​limit increase. Various sorts of balanced budget amendments and debt limits relative to GDP are being kicked around. I support those ideas, but I fear that they may be too complicated to gain traction right now.


A simpler idea would be to impose a statutory limit on annual spending growth of 3 percent. If total federal outlays in a year were $4 trillion, the government couldn’t spend more than $4.12 trillion the next year. It would be that simple.


Such a limit would be easy for policymakers and the public to understand and enforce. It would put ongoing pressure on Congress to cut discretionary programs and reform entitlements. With spending growth limited to 3 percent, the budget would be balanced in just over a decade and growing surpluses would be generated after that. The federal government would shrink as a share of GDP. The math is simple: federal revenues and GDP are expected to grow substantially faster than the 3 percent spending limit over the next decade and beyond.


I want Congress to enact major cuts to spending, not just to limit spending growth. But one advantage of an annual growth cap is that it would lock‐​in any spending cuts that are made, and thus spending would be ratcheted downwards.


Under such a limit, the OMB and CBO would issue regular reports showing spending for the coming fiscal year relative to the projected legal cap, which would make it clear to political leaders, reporters, and voters how much needs to be cut. The president would also be required to propose a budget each year that fit under the estimated legal cap. If the beginning of a new fiscal year arrives and spending is still expected to be above the limit, the president would be required by law to impose an across‐​the‐​board cut to bring spending into line.


In the past, I’ve proposed a spending growth cap equal to the sum of inflation plus population growth. (This sum is expected to be about 3 percent in coming years). But a fixed and explicit percent cap would be even simpler and easier to enforce. A fixed percent cap would also encourage policymakers to support a low‐​inflation policy by the Fed because the lower was inflation, the higher the budget limit in constant dollar terms.


The chart shows the proposed spending in Obama’s new budget compared to spending capped at 3 percent. The spending cap line assumes that the GOP’s discretionary cuts are put in place this year. It also assumes that spending grows at the maximum 3 percent each year, but if spending were restrained more than that, the cap would ratchet down to a lower level. The chart also shows projected federal revenues based on CBO data, assuming the extension of current income tax cuts and AMT relief. (See page 22). 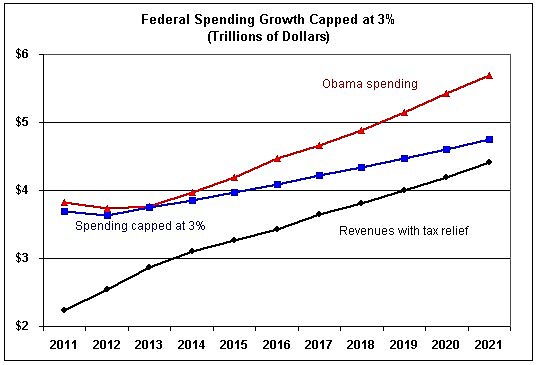 Limiting spending growth to 3 percent is a modest goal, but over time the results would be quite dramatic compared to Obama’s no‐​reform spending plan. Spending in 2021 would be about $1 trillion less than the president is projecting—$4.7 trillion rather than $5.7 trillion. As a share of GDP, Obama’s 2021 spending of 23.9 percent would be cut to 19.9 percent. And the budget would be closing in on balance that year with revenues at 18.6 percent of GDP with tax relief in place. (Figures based on OMB GDP).


At Down​siz​ing​Gov​ern​ment​.org, I’ve proposed spending cuts that would take the federal government down to 15 percent of GDP or less. But getting a new budget mechanism signed into law takes centrist support, and I think that a 3 percent growth cap to balance the budget in a decade or so is a reasonable goal that could gain broad agreement.


Finally, it makes sense to include in such a budget law the ability of policymakers to spend over the cap temporarily for emergency war funding with a two‐​thirds vote in both House and Senate. Without such a temporary escape hatch, Congress would likely simply repeal the law when it entered a costly war.