Presidential candidate Joe Biden said that he does not favor defunding police but instead “conditioning federal aid to police based on whether or not they meet certain basic standards of decency and honorableness.” Biden is proposing to increase federal aid for state‐​local police forces.

The federal government currently spends relatively little on funding state and local police. Total federal aid to the states for the “administration of justice” in 2019 was $5.2 billion, a portion of which goes to police forces for programs such as COPS. Federal aid is a small share of total state‐​local police funding, but it is a tail that wags the dog in terms of federal control.

The chart below shows aid in this category since 1990 in actual or nominal dollars. (Data is from Table 12.3). The jump in spending in the 1990s stems from the high‐​profile 1994 crime bill.

Aid to the states for state‐​local police should be zeroed out for the same reasons it should be ended for other state‐​local activities, as discussed in this study. One problem is that federal politicians make big mistakes and then impose those big mistakes on the entire country. It is much safer if we let states and cities try to improve their policies with various approaches and then learn from each other’s successes and failures. 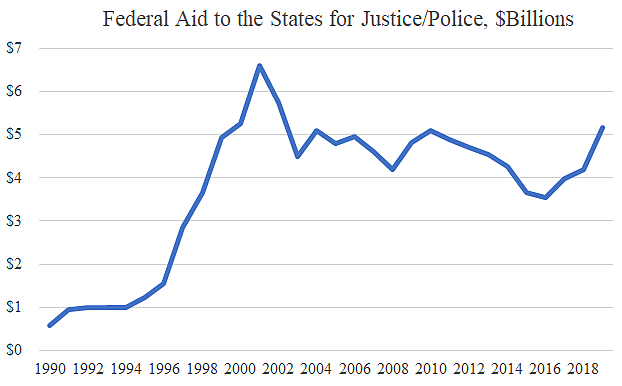