In a recent study, I described 18 reasons why federal aid‐​to‐​state programs should be eliminated. Aid programs are federal subsidies for state and local activities such as K-12 schools, transit, roads, and housing.


One problem I did not explore in detail is how federal aid fuels political corruption. A Politico story the other day describes a classic case. Apparently, Senate Majority Leader Mitch McConnell has been successfully pressing the Department of Transportation (DOT)—headed by his wife—to give grants to favored projects in his home state of Kentucky.


Corruption is a harsh word, but consider this contrast. On the one hand, Politico quotes the DOT spokesperson in response to the McConnell scandal: “No state receives special treatment from DOT … Discretionary grant programs are competitive and based on merit.”


On the other hand, McConnell himself frequently brags about bringing home pork to Kentucky. He has never been shy about it, as the Politico story illustrates. And in the story, DOT grant recipients in Kentucky are quite sure that McConnell’s arm‐​twisting made the difference.


If DOT grants are supposed to be allocated on merit, but they are actually steered by self‐​interested power politics, that’s corruption. And that pork‐​barrel dynamic exacerbates inefficiencies in the aid system, such as the misuse of resources in low‐​value activities, as discussed in my study.


Here are excerpts from the Politico story by Tucker Doherty and Tanya Snyder:

The Transportation Department under Secretary Elaine Chao designated a special liaison to help with grant applications and other priorities from her husband Mitch McConnell’s state of Kentucky, paving the way for grants totaling at least $78 million for favored projects as McConnell prepared to campaign for reelection.


Chao’s aide Todd Inman, who stated in an email to McConnell’s Senate office that Chao had personally asked him to serve as an intermediary, helped advise the senator and local Kentucky officials on grants with special significance for McConnell — including a highway‐​improvement project in a McConnell political stronghold that had been twice rejected for previous grant applications.


Beginning in April 2017, Inman and Chao met annually with a delegation from Owensboro, Ky., a river port with long connections to McConnell, including a plaza named in his honor.


… Chao’s designation of Inman as a special intermediary for Kentucky — a privilege other states did not enjoy — gave a special advantage to projects favored by her husband, which could in turn benefit his political interests.


… In fact, days after launching his 2020 reelection campaign McConnell asked Owensboro’s mayor to set up a luncheon with business and political leaders at which the senator claimed credit for delivering the grant. “How about that $11 million BUILD grant?” McConnell asked the crowd rhetorically, according to the Owensboro Times. He then recalled his role in securing earlier grants to the city, adding, “It’s done a lot to transform Owensboro, and I was really happy to have played a role in that.”


… Owensboro wasn’t the only beneficiary of Inman’s assistance. He also communicated with McConnell’s office about multiple requests from county executives to meet with Chao to speak about potential projects in Kentucky, according to emails which, like the others, were obtained under the Freedom of Information Act by the watchdog group American Oversight. 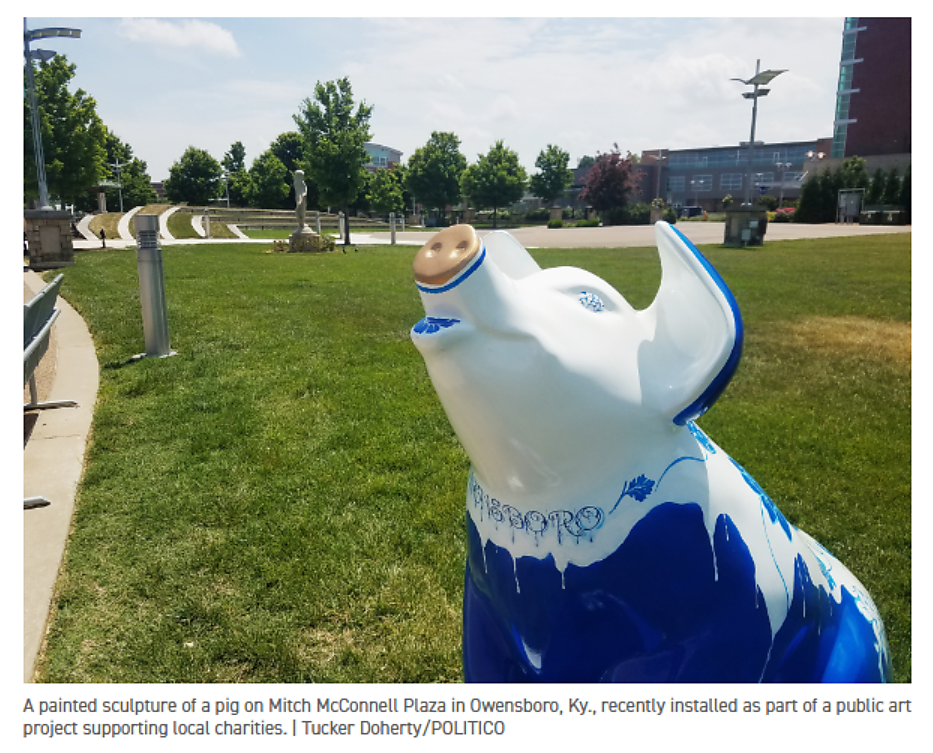