House and Senate farm subsidy supporters are pushing to enact the first big farm bill since 2008. Democratic and Republican supporters say that this year’s legislation will be a reform bill that cuts spending. Hogwash. 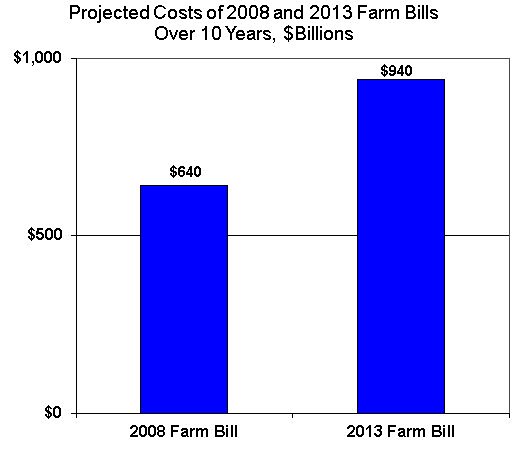 Since the 2008 farm bill, we’ve had five years of moderate inflation, which has eroded the value of dollars by about 8 percent. Thus, the 2013 House farm bill would increase real spending by 39 percent compared to the 2008 farm bill.

The Republican-controlled House Agriculture Committee says that its bill “saves taxpayer’s money,” “reduces deficit spending,” and “repeals outdated government programs.” That sounds good, and the GOP bill is officially scored to “save” $33 billion over 10 years. But that savings is against the CBO baseline of $973 billion in farm bill spending over 10 years, so the House bill can be said to “cut” spending by 3 percent.

Given today’s huge federal deficits, a 3 percent “cut” by Republicans is a joke in itself. But that’s only a cut against baseline, and since baseline spending has soared in recent years it’s no cut at all.

Despite the fact that politicians are claiming that the proposed new farm bill cuts spending, it’s just a mirage created by rising baselines. The truth is that the House farm bill would spend 47 percent more over 10 years than the last farm bill, or 39 percent more in inflation-adjusted dollars.

For background, see this new study by Sallie James and this essay on the history and failures of farm subsidies. Also note that three-quarters of “farm bill” spending is for food subsidies, which you can read about here. And if you’re in D.C., come and hear about the farm bill at our Capitol Hill event at noon Thursday.