Under cover of SOTU media coverage, Congress is set to sneak through the first big farm bill since 2008. The Congressional Budget Office released its estimate of the bill’s cost: $956 billion over 2014–2023. It would thus mean almost $1 trillion more borrowed from U.S. and foreign creditors, adding more weight to the anchor pulling down the living standards of our children and grandchildren.


If you are a reporter, please don’t write that the farm bill “slashes” anything. Even according to the official score, it just trims $16.5 billion from expected spending of $956 billion over the decade, which is just 1.7 percent. The food stamp (“nutrition”) portion of the bill trims just $8 billion from expected spending of $756 billion, which is just 1.1 percent.


Sure, the new bill shuffles the farm subsidy deck chairs, but the bill’s main budget attribute is that it ratifies the huge recent increase in food stamp spending. The House bill had proposed trimming a modest $39 billion (5 percent) from food stamps, but Republican leaders caved in and agreed to just a token 1 percent trim in the final bill. 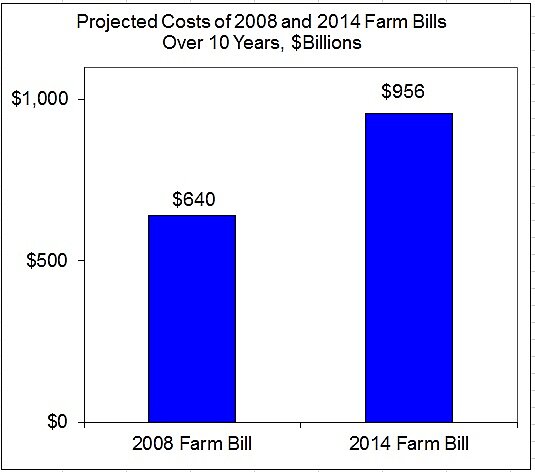 Here are 10 reasons why the farm bill makes no sense.