Facts About the Summer Work and Travel Program

President Trump will be considering recommendations from his administration this week on which immigration programs to cancel during the economic recovery after the COVID-19 pandemic subsides. One program that immigration restrictionists in the administration will likely recommend cutting is the Summer Work and Travel Program (SWTP)—which is part of the J-1 exchange visa program—because it allows foreigners to work in the United States.

On its face, President Trump should like the SWTP. It fits his brand of “merit‐​based” immigration. Participants must be college students at foreign universities, be proficient in English, and generally have job offers already lined up in the United States. They are ineligible for all means‐​tested federal public benefits. The program even has requirements that students not work for employers who will replace U.S. workers or not pay them as much as U.S. workers.

U.S. nonprofit organizations sponsor students and arrange their housing and employment. The flow chart below from the Government Accountability Office provides a useful explanation of the program’s operations. Sponsors must receive permission from the State Department to sponsor students. The sponsors recruit foreign students to join their program in exchange for fees and find employers to offer jobs to them. The State Department handles oversight through its Bureau of Educational and Cultural Affairs, Kentucky Consular Center, and embassies or consulates abroad. 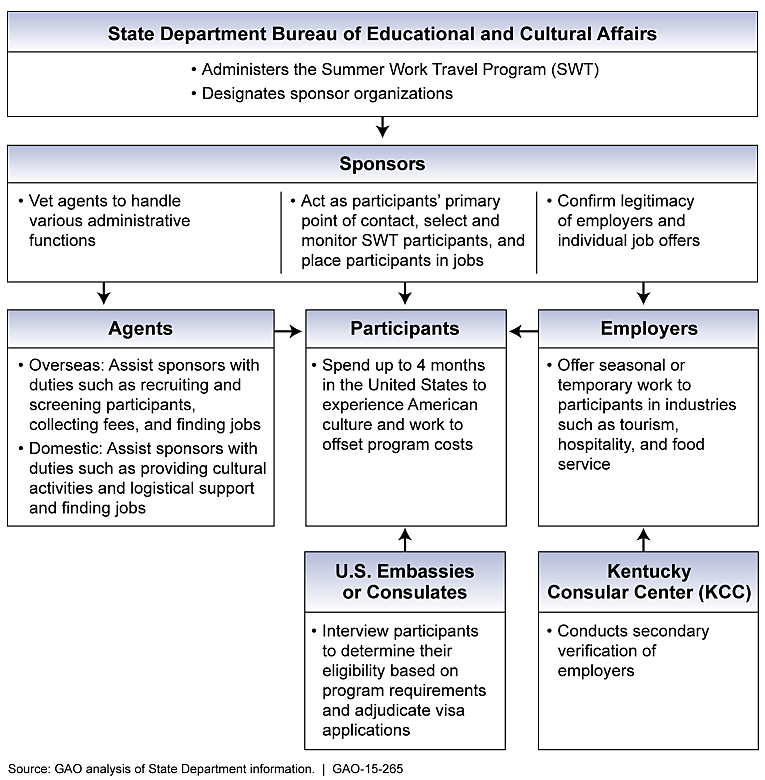 Congress created the J visa category—of which the Summer Work and Travel Program is a part—in 1961 in the Mutual Educational and Cultural Exchange Act (Fulbright–Hays Act). The purpose of the legislation was “to increase mutual understanding between the people of the United States and the people of other countries by means of educational and cultural exchange” and by demonstrating “the achievements of the people of the United States and other nations, and the contributions being made toward a peaceful and more fruitful life for people throughout the world.”

The State Department has called the SWTP “a cornerstone of U.S. public diplomacy efforts for nearly 50 years.” Since 1987, more than 8.3 million people have received J-1 exchange visitor visas—about 2.3 million of these visas have come under the Summer Work and Travel Program. The program peaked in 2008 with 152,726 participants. In 2011, the State Department introduced a program cap of 109,000—the number of participants that year—which it has maintained through 2020. Because it also stopped allowing any new sponsors, the number of total participants declined to less than 90,000 in 2013 before averaging about 105,000 in recent years.

With 7,001, Ireland was the most common country of origin for Summer Work and Travel Program participants in 2015—the only year for which that information is publicly available. The rest of the top 5 included Bulgaria, China, Romania, and Ukraine, each with more than 5,000.

The original purpose of allowing employment under the cultural exchange program was that it allowed students from all backgrounds to visit the United States because a summer job could underwrite the cost of their time in the United States. The SWTP students generally work seasonal summer jobs in places like Ocean City in Maryland, Long Island in New York, and Mackinac Island in Michigan. The students work and experience normal U.S. life for the average college student on summer break, returning to their home countries with a generally positive experience.

In 2015, Disney was the largest SWTP employer with 2,355 workers. The other top 5 employers were Cedar Fair Parks, McDonald’s, Six Flags, and Xanterra Parks and Resorts. Figure 3 shows the distribution by employment sector. By far the largest employment sector was leisure and hospitality with 53,237 workers. Arts, entertainment, and recreation was second with 17,950.

The fact is that SWTP workers support jobs for U.S. workers. Even an entirely one‐​sided anti‐​SWTP article based around a single anecdote relays how one SWTP worker at a restaurant in Maryland worked “back of the house jobs,” which supported U.S. workers who filled “server positions that came with better pay and tips.” Unfortunately, this disparity created resentment, but the vast majority of SWTP workers report positive experiences because they are happy to work with Americans in whatever capacity.

Many employers rely on J-1 visas to support essential operations of their businesses. When the Trump administration suddenly increased J-1 visa denials last year, some businesses in Ocean City, Maryland had cut their operations. “We reduced our hours which in exchange has reduced our business,” said Anna Dolle Bushnell, the co‐​owner of Dolle’s Candyland in Ocean City. “So May wasn’t so great. It could have been a fantastic month, but we just weren’t able to keep our stores open simply because we don’t have enough staff.”

A report funded by the SWTP sponsors calculated that the program contributes to the United States about $500 million annually. This seems like a reasonable estimate, if not actually a bit low today. It works out to about $4,800 per participant. Assuming that the average worker works a normal workday for 3 months, that would be just $9.25 per hour, lower than many states minimum wages.

Rights Under the Summer Work and Travel Program

Union‐​funded organizations are attempting to undermine the SWTP because the foreign students don’t stay long enough to join a union and pay union dues. They fund organizations like the National Guestworker Alliance (NGA) to turn foreign students against their employers by promising them that they can receive more money from lawsuits and formal complaints. In the most popular story along these lines, NGA recruited a dozen of 385 students working at a Hershey’s packing plant in Pennsylvania to join a 2011 complaint alleging workplace violations including “heavy lifting” and “low” wages—despite the wages being above the state minimum wage.

In this supposedly “egregious” case cited in almost every piece of anti‐​SWTP propaganda, NGA managed to recruit only 3 percent of Hershey’s students, complaining only days before leaving the country on the promise of receiving additional compensation. But the complaint had no merit. As one student put it in a statement to the State Department, “I disagree with the actions of these students. We knew everything beforehand. The job offer and description were clearly written… We have the right to choose a job, and if they did not like it, [they] should have chosen something else.”

In fact, the sponsor did find new jobs for the ten students who did decide to leave the Hershey jobs and cooperated with its job search. Another student at the plant said she was “ashamed” of the protesting students. Indeed, the State Department’s investigators found several students who came to the Hershey plant a second time the following year, despite the supposedly inhumane conditions.

Under the SWTP rules, workers can leave their jobs or request new ones at any time. This is quite different from temporary worker programs that have rules preventing the easy transition between jobs. In 2011, the State Department imposed new detailed rules that exclude many job opportunities from the program including hazardous jobs.

In 2011, responding to the Hershey controversy, the State Department suspended all growth in the program, creating a de facto cap of 109,000. On March 19, 2020, the State Department suspended the program entirely for 60 days. Unfortunately, this cap and suspension could provide bases for the Trump administration to further restrict the program. There is absolutely no reason during the economic recovery. The U.S. unemployment situation will resolve itself naturally when the pandemic subsides. Both Americans and foreign workers are sidelined now, but the recovery should not be injured by pointless visa restrictions.