The federal government imposes a mandate to blend corn ethanol and other biofuels into the nation’s gasoline. This “renewable fuel standard” or RFS produces a range of negative effects, as discussed in this study at DownsizingGovernment. 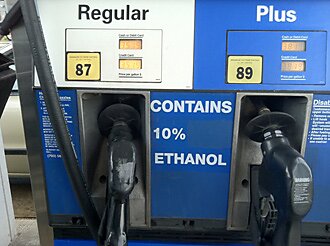 The “10% Ethanol” sticker you see at the gas station indicates that the government is subverting your free choice and raising your driving costs to benefit corn farmers. The government has decided that corn farmers are more important than you are.


President Trump has supported the ethanol mandate, and he recently acted to increase the harm by allowing greater use of a 15 percent ethanol blend.


A Washington Post editorial today describes why that move is misguided:

For more than a decade, the United States has pursued the foolhardy energy policy known as the Renewable Fuel Standard, or RFS. Thanks to legislation passed by a Democratic Congress and signed into law by a Republican president, George W. Bush, in 2007, the RFS illustrates the sad‐​but‐​true principle of Washington life that bipartisanship is no guarantee of wisdom. In a nutshell, the RFS required the nation’s petroleum refiners to blend ever‐​increasing quantities of biofuels, chiefly ethanol, into gasoline, purportedly to promote energy independence and fight climate change.


Never mind that the United States has meanwhile become a major oil exporter, due to a production boom. Never mind that the environmental harms of ethanol arguably outweigh its benefits, because it takes massive amounts of energy to distill ethanol from corn — and massive amounts of fragile farmland to grow that crop. Never mind that diverting resources into corn production for ethanol raises the price of food. Never mind all that, because 39 percent of Iowa’s corn crop goes to create nearly 30 percent of all U.S. ethanol. And Iowa is a swing state with six crucial electoral votes and a first‐​in‐​the‐​nation presidential caucus; whatever Iowa wants, Iowa gets, from politicians of both parties.


Hence President Trump’s announcement, on the midterm‐​election campaign trail in Iowa, that he would, in effect, double down on this decreasingly justifiable policy. Mr. Trump declared that the Environmental Protection Agency will draft regulations allowing the year‐​round sale of motor fuel containing 15 percent ethanol, as opposed to the 10 percent limitation in effect for several months a year because of air‐​pollution concerns related to summertime atmospheric conditions. This would incentivize gas station owners to install pumps capable of delivering the fuel, thus boosting ethanol sales.


The point is to rescue Iowa corn farmers from adverse market conditions, which include lower prices because of retaliation from trading partners against Mr. Trump’s tariffs. The more fundamental problem is that, at its inception, the RFS assumed that ever‐​rising U.S. gas consumption would permit refiners to absorb huge amounts of ethanol. In fact, the year after Congress adopted the bipartisan RFS legislation, the U.S. economy went into a recession, causing a collapse in the number of miles Americans drove and the amount of fuel consumed per capita. Only last year did consumption return to pre‐​recession levels.


Refiners face high and rising costs when they are forced either to mix more ethanol into their motor fuels or to buy offsetting credits known, obscurely, as Renewable identification numbers (RIN). Plagued by volatility and manipulation, the market for RIN has turned into a major headache for smaller refiners, which often seek waivers of the ethanol blending requirement. The entire system adds enormous bureaucracy and complexity to the fuel market, with little or no benefit to consumers. E15, as the 15 percent ethanol blend is known, might cost less per gallon, but because of its lower energy content, motorists would probably get poorer mileage and have to fill up more often.


The petroleum industry has promised a lawsuit to stop Mr. Trump’s plan. While we hesitate to take sides between agribusiness and Big Oil, in this instance public policy clearly favors the latter.