This is not the first upward revision. In last year’s report, In earlier estimates these newly eligible adults were projected to have average benefit costs one percent lower than adults that were already eligible, but in last year’s report this expansion population was instead estimated to have average expenditures 19 percent higher. So per enrollee costs, previously estimated to be $4,636 in 2014, were revised up to $5,517.

Per Enrollee Costs for Newly Eligible Adults, by Year of Report 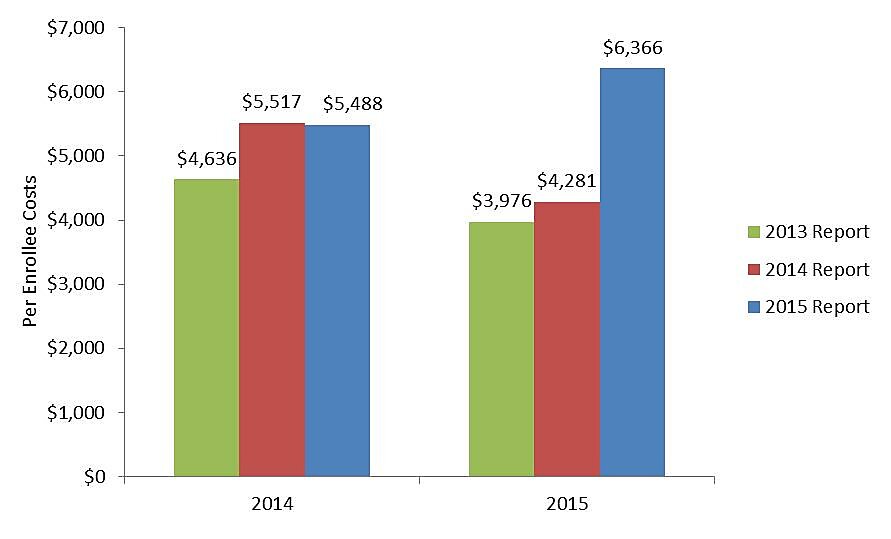 The new report suggest that much of the discrepancy in estimates can be attributed to states putting more of these newly eligible enrollees in managed care which have capitation rates that were much higher anticipated. There is a high degree of uncertainty whenever actuaries have to project expenditures and costs for newly eligible groups like this, and it is possible that when more data for this newly eligible population and different adjustments for risk-sharing arrangements, the per enrollee expenditures for this group could be slightly lower. That said, that the estimates from 2014 report for the following year were so much lower should raise some concerns. Many states are in a tight fiscal position and have already had to make adjustments to other areas of their budgets. If the costs of this expansion population continue to be much higher than initial projections, it will place even more pressure on their already strained budgets.

Per Enrollee Costs for Newly Eligible Adults Through 2022, by Year of Projection 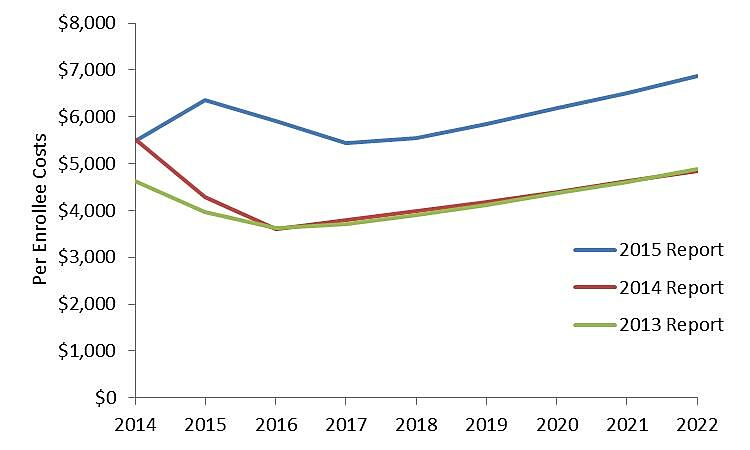 This uncertainty, and the implications it could have for state and federal costs, is illustrated in Figure 2. By 2022, projected per enrollee costs for this newly eligible population is more than 40 percent higher in the 2015 report than it was in the previous two years. The outer years of this projection are most important from the state perspective because it is when they will begin to bear some of the costs of the Medicaid expansion population. States that have moved forward with the Medicaid expansion might be forced to pursue significant fiscal adjustments to other aspects of their Medicaid programs, or to other components of their budgets.

The actuaries now project Medicaid outlays to be almost $250 billion higher than last year’s estimate (over the nine years where they both have projections). This projected increase comes even as they ratcheted down their assumption about how many states would expand Medicaid in the future, from 60 percent of the potential expansion population to only 55 percent.  If the recent trend continues and this newly eligible population continues to be much more expensive than anticipated, the expansion could end up costing much more.