The Center for American Progress Action Fund (CAPAF) has sounded the alarm: Donald Trump’s proposal to eliminate the U.S. Department of Education (ED) would be pure loss because a lot of people use federal education money. Lost jobs, lost college access, lost learning. Which makes sense if you assume that the federal government miracles money into existence, people can’t adjust to changing circumstances, and federal control can only help.


Of course, the federal government does not just will money into existence. It does spend far more than it has, but sooner or later someone is going to have to pay for that. And money arriving through taxation comes from people who may have used it for other, more productive things. Taxpayers may have spent it on new businesses, or housing, or food, or lots of other things that would have potentially grown the economy and created new jobs. Or heck, just made them happier. So there are costs—maybe big ones—that CAPAF ignored: opportunity costs.


Then there are costs to dealing with ED demands. Yes, as CAPAF points out, the department has a relatively small workforce—about 4,300 full‐​time equivalent employees—but that is in part because ED makes states do a lot of the administrative heavy lifting, forcing them to hire a lot of bureaucrats. There is also a sizeable compliance cost that goes with federal programs. The latest available numbers I could find were from a 1998 report—pretty old—but that precedes the No Child Left Behind Act, which greatly expanded federal management. That report suggested that for every dollar sent to Washington only 85 cents made it back to local districts, and noted that there were nearly three times as many state employees being funded by federal money as ED employees.


How would ED be eliminated? While it is unclear how Trump would do it—details do not seem to be his thing—he would likely phase the department out, not just kill it all at once. Of course, he could just move the programs elsewhere in the federal bureaucracy. But assuming that by killing ED he means to kill the programs, he would probably phase them out, leaving states, districts, colleges, and students time to adjust. And if he were to couple phasing out the programs with, say, proportionate tax relief, or even just block grants to states, that money could still be used for education! It would not necessarily mean any lost teacher jobs, student aid, or anything else. It could just mean that instead of losing 15 cents in bureaucratic processing for each dollar, taxpayers could keep the whole buck!


Would trimming what we spend necessarily even be bad educationally? Signs pretty clearly point to “no.” As the graph below shows, as well as this report on SAT scores, large spending increases haven’t come close to producing commensurate improvements in achievement, at least as measured by standardized tests for high school kids. Those scores have essentially sat still. Same for staffing: In roughly the same period as is covered in the graph, public schools went from about 14 students per staff member, to just 8 students, approaching a doubling of employees per child. Even the high‐​school graduation rate “all‐​time highs” that sound so nice aren’t: CAPAF cited a report based on only four years of data, and longer‐​term data show in 1969–70—close to when the feds first got heavily involved in education—the average freshman graduation rate for public schools was 78.7 percent. As of 2012–13—the latest data on the chart—it was 81.9 percent. Hardly a huge increase, and possibly one inflated by “credit recovery” and other dubious practices. Oh, and the feds coerced states to adopt a single curriculum standard—the Common Core—only to see tremendous backlash after the public finally became aware of what had been foisted on them. At the very least, great political acrimony and stomach‐​churning educational turbulence have been the result. 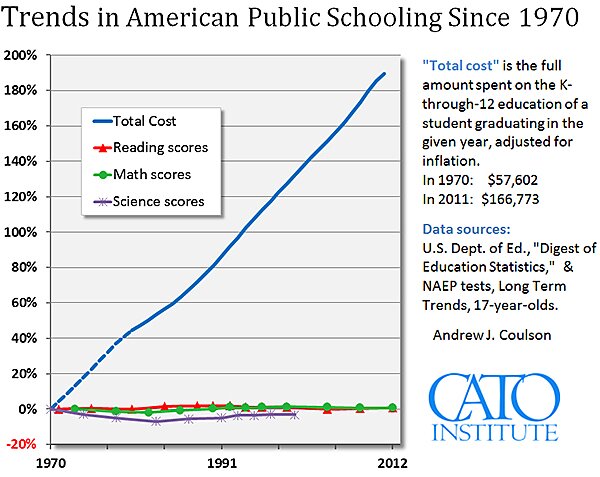 The evidence—more of which can be found here—suggests that in K–12 education, federal involvement may well be a loss, not a gain.


How about higher ed? Federal student aid, it is becoming increasingly certain, has largely translated into skyrocketing prices, major non‐​completion, credential inflation, and big student debt. Hardly the pure affordability effect that is all CAPAF discusses. You can get more in‐​depth on higher education here.


There is one other thing that ought to be mentioned, though it may seem passé: Washington has no constitutional authority to meddle in education outside of DC itself, federal installations, and prohibiting state and local discrimination in education provision. Yet the vast majority of what ED does goes far beyond those things. Ignoring the Constitution comes with costs all of its own, which CAPAF—and everyone else—may learn very quickly if there is a President Trump and he, among other things, unilaterally tries to change federal education policy. You know, like President Obama.


CAPAF portrays the U.S. Department of Education as all gain, and it’s possible ending all pain. But there is a whole other side to federal education meddling: costs. And they are big.