End of Fiscal Responsibility in Canada?

Canadian federal elections yesterday ousted the ruling Conservatives under Stephen Harper and replaced them with the Liberals under Justin Trudeau. The Liberals have promised to increase taxes on high earners, ramp up spending on government infrastructure, and purposely run deficits to supposedly stimulate the economy.

It appears that two decades of fairly sensible and fiscally conservative government is ending at the federal level in Canada. Under the Liberals (1993-2006) and then the Conservatives (2006-2015), Canada cut spending, privatized government activities, cut tax rates, and slashed government debt. The reforms are discussed here.

The extended run of spending restraint and pro-growth policies by the Canadian federal government was impressive, and it contributed to a strong economy and rising incomes. Now the democratic pendulum has swung back to the left. The country may be in for another experiment in Santa Claus economics, which it suffered from during the 1970s under prime minister Pierre Trudeau, the father of the newly elected prime minister.

The chart shows federal spending in Canada and the United States over the past five decades. You can see that soaring outlays under Pierre Trudeau (1968-1984) outpaced even the high spending of Nixon, Ford, and Carter south of the border.

But you can also see that the Canadian restraint since the 1990s has been remarkable, especially compared to the spendthrift policies since 2000 under Bush and Obama in the United States. Canadian federal spending plunged from 23 percent of GDP in 1993 to just 14 percent by 2015. By contrast, U.S. federal spending in 2015 was 21 percent of GDP. While U.S. spending used to be lower than Canadian spending, it is now almost 50 percent higher relative to the size of the economy. 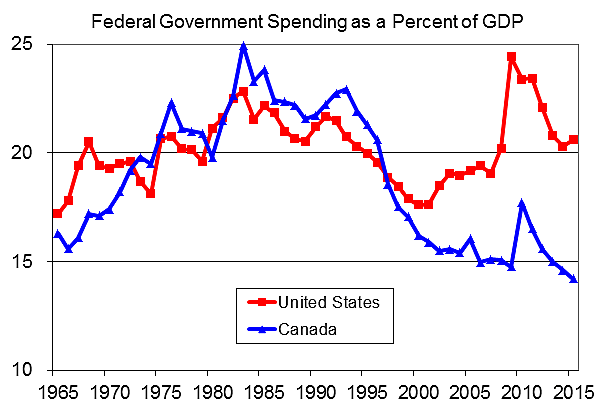