Some pundits are blaming the slow federal response to Covid‐​19 on budget cuts and supposedly shrunken federal bureaucracies. Bloomberg columnist Noah Smith claimed, “Recently, though, the U.S. has allowed its civil service to shrink and its salaries to become less competitive with the private sector, outsourcing many of the bureaucracy’s functions.”

However, budgets for the CDC and NIH have risen substantially, as I charted here. And while the claim about salaries is debatable, it is not correct that overall federal compensation including benefits is uncompetitive.

The chart below shows the total number of employees in the NIH, CDC, and FDA from 1998 to 2019, sourced from OPM.

NIH employment dipped over the past decade but is a bit higher than 20 years ago.

CDC employment increased almost one‐​third over the past 15 years.

FDA employment soared two‐​thirds from 2007 to 2016 but has dipped slightly since then.

Are more employees better? The NIH mainly hands out grants to researchers, an activity in which productivity has probably increased as technology has improved. Thus, more workers would likely not be needed even as the budget increased.

As for the FDA, more employees may be a negative to the nation since one of the agency’s activities is to hinder the introduction of new medicines and devices. In this crisis, the agency’s blockage of private‐​sector virus testing was hugely damaging. 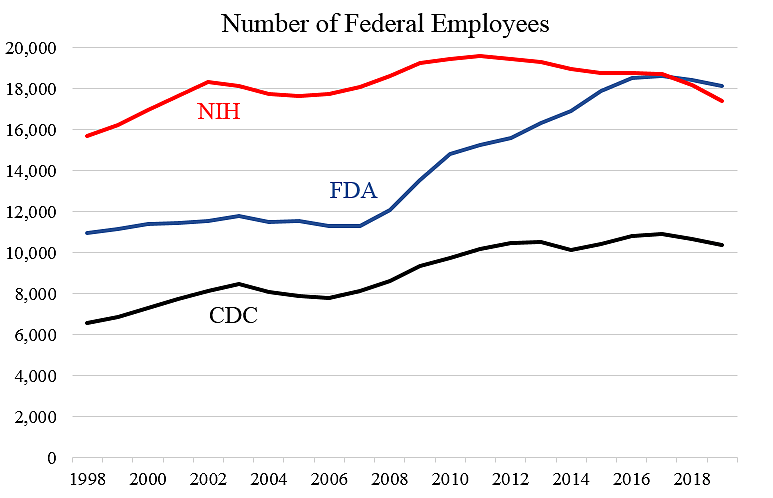 Note: Data are for September of each year except 2019 which is June.

David Kemp assisted with this blog.