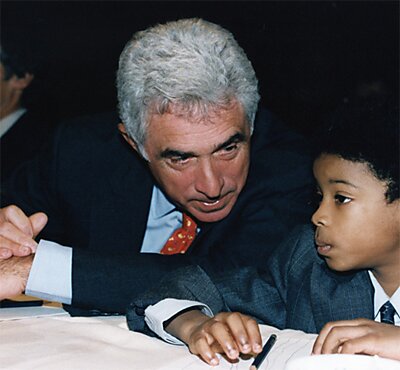 Ted Forstmann passed away yesterday at the age of 71. Forstmann was most famous for his pioneering work in the business world, and he was for a time a board member of the Cato Institute, but many others knew him as one of the most generous and thoughtful education philanthropists of our time. I first met him in the late 1990’s, when he was planning the launch of the Children’s Scholarship Fund (CSF) with his friend John Walton. CSF is a non‐​profit K-12 scholarship organization that provides tuition assistance to low‐​income families wishing to send their children to private schools. Understanding that direct financial responsibility encourages parents to be more involved in their children’s education, Forstmann ensured that CSF grants required parents to make a co‐​payment out of their own pockets, based on what they could afford.


Critics argued that poor parents would be unwilling or unable to come up with even a small fraction of the cost of private school tuition to make these co‐​payments. But when CSF was launched in 1998, there were 1.25 million requests for the 40,000 scholarships initially available. The myth that poor, inner‐​city parents don’t care about their kids’ education was shattered. Since its inception, the program has raised nearly half a billion dollars and served 123,000 children.


The Children’s Scholarship Fund continues to operate today, and its website can be found here.


Ted Forstmann wanted all families to have access to a free and dynamic education marketplace. He didn’t live to see it, but he greatly advanced that cause. The fact that it is now within reach is in no small part due to his efforts. Scholarship programs like CSF are now operating around the country, many of them bolstered by education tax credit programs that allow donations to them to be written off, dollar for dollar, from state taxes. Such programs exist in Florida, Pennsylvania, Arizona and four other states, with a new program passed this year in Oklahoma and another under consideration in Ohio. By scaling‐​up these programs it would be possible to achieve the goal of universal access to the marketplace that Forstmann and many others have long pursued.


We’ll keep working toward that goal. And we’ll miss you, Ted.