In Education, the Goal Posts Move 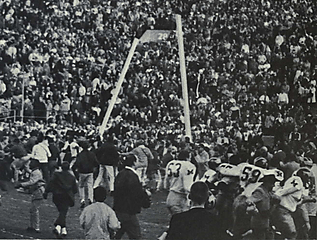 Other than in Shaquille O’Neal’s stunning vision of the future of basketball, the goals in sports don’t move. If they did, it would make the games a whole lot more random, and the outcomes unreliable indicators of who is really the better team. But in education—as we’re seeing with the hue and cry over new test results in New York—the goals do move. A lot. That’s pretty ironic considering that the top‐​down measures are specifically intended to establish set standards.


Earlier this week, New York released the results of its first statewide tests to gauge student mastery of the Common Core national curriculum standards. Not surprisingly, “proficiency” rates crashed, plummeting between 24 and 34 percentage points depending on the subject. But as Core supporters rightly warned, plummeting scores don’t necessarily indicate plummeting performance; they indicate that the goal posts have moved. Of course, supporters say the posts have moved higher—like basketball hoops in Shaq’s 2044—and that may be the case. But what’s more important is just that the goals are in different places—maybe they moved to the side, not up—and students haven’t been shooting in that direction.


This is far from the first time the goals have jumped, ducked, or shifted in the “standards” era. Throughout the No Child Left Behind years we saw states changing tests, standards, etc., so results often weren’t comparable from one year to the next. And New York itself revealed a few years ago that its tests had gotten easier over the years, rather than its education system getting much better.

Perhaps the most troubling consequence of all this is that these top‐​down standards‐​and‐​testing regimes are supposedly giving us bright‐​line indicators of student knowledge and ability, but that line is constantly leaping around. In other words, it’s shiny but worthless. And the line isn’t all that bright, really. Very often parents never get to see the tests their children take, especially year‐​after‐​year iterations to see how the exam has changed. And even if they could access the tests, how many have time to thoroughly vet them? I’d guess roughly zero.


Then there’s the problem of a baseline, which is going to be difficult to establish in New York with this year’s results. For one thing, it’s quite clear that the new tests were administered before the corresponding curricula were in place. The Common Core may be a higher or lower standard than what New York used to have, but again, for the tests, much of what matters is only that the Core is different. You may be a great all‐​around athlete, but if you’ve been training for baseball you’re not going to look so good if you suddenly have to play football. Moreover, there is decent reason to believe that some, or maybe many, types of test items will need to be changed in the next go‐​round because they were simply poorly constructed. If they are improved, scores will also go up—but that will be because the tests have gotten better, not the education.


From an immediate political and policy perspective, the worry about the latest goal teleportation in New York is not that people will reject the Common Core, as Core fans fear, but that when scores almost certainly rise next year Core supporters and school officials will declare the schools and Core “working.” But a score increase very likely won’t indicate improving education nearly as much as students and schools simply shooting in the direction to which the goal has moved. It may also very well reflect improvements made to test items after examining problems in this year’s assessment.


In the long term, the problem is clearly top‐​down goal‐​control to begin with. Aside from the basic problem that all children are different and need different things, the evidence is awfully clear that politicians love to reorient goal posts. Sometimes it’s because they don’t like the scores that the current goals are producing. Sometimes it’s because they are coerced into change. But as long as they keep doing it—and whenever you are trying to get votes, you will have a strong incentive to appear to “make things better”—the score of the game will be close to worthless. And that doesn’t really help anyone.