Matt Yglesias thinks my assertion that we would be better off economically if education money stayed with taxpayers rather than going to public schools and universities is "totally insane." Ouch!

Now, I can actually understand this, because many people have difficulty envisioning things other than what they've always known. But have I really gone all Crazy Eddie? If government didn't spend taxpayer dough on education, would the poor be much worse off than they are today? Can we never over-invest in schooling because education is just so important? Does the college wage premium mean we should never ratchet down subsidies for college education? And is it at least possible that spending more and more public dough doesn't lead to more or better education -- by which I mean actual, valuable learning -- as much as more waste?

Unfortunately, it seems Ygelsias didn't follow any of the links I provided in the post containing the line he objected to, which furnished some valuable data answering these important questions. And, by the way, it really was just one line he seemed to dislike -- the point of the post was to argue against spending yet more taxpayer dough on an education-centered stimulus, not for complete separation of school and state. And, of course, tax-credit-based school choice leaves taxpayers in control of their money without eliminating support for education.

But let's start answering our questions in more depth so that Mr. Yglesias and others can start to think outside of the "how we've always done it" box.

First, let's hit one critical point: Spending taxpayer money on government schooling does not actually mean you get better education. Let's look at that graphically: 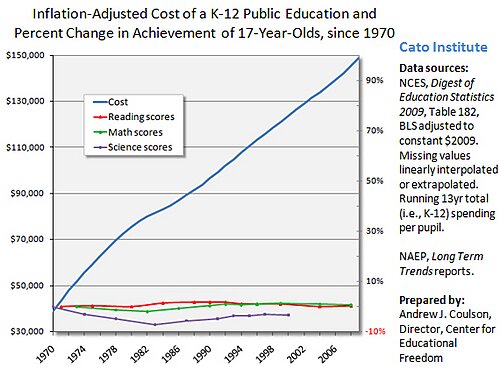 Here you can see nearly four decades of precipitously increasing expenditures on K-12 education plotted against student performance. And what does it reveal? No correlation between the Death Valley of academic achievement and the Everest of spending. Ever-more taxpayer dollars have gone into the government education system, but the system hasn't improved at all. Why? Because the educators receiving the money have no need to get better -- they've gotten ever-more dough no matter what, in large part because many people simply assume that increased government spending on education equals better education. But if you spend hugely greater amounts and get no better results, that seems like it would be an economic drain, no? Which was exactly what I was arguing.

How about higher education?

On a per-pupil basis, over the last quarter-century spending on public colleges and universities has been steady overall, while aid per student at all schools has gone way up. And what do we have to show for that?

The first thing is  incredible tuition inflation -- the bane of American higher education. On a per-pupil basis, since 1988 real aid per student has risen 144 percent, while prices have inflated 81 percent at four-year-private schools and 145 percent at four-year publics. It seems, at least in part, that colleges and universities raise their prices because, well, the aid makes sure they can.

Surely, though, the schools use that money to provide more people with ever-better educations? Maybe, but much of the new money seems to have gone just to hiring more administrators, freeing professors from teaching so they can conduct research, and erecting ever more fabulous amenities. Which brings us back to the economic point: Maybe taking money from taxpayers to subsidize all this empire-building and waste might be an economic loss because taxpayers would otherwise spend the money more wisely. Maybe they'd invest in companies that provide better, cheaper products; give money to charities; buy education from stripped-down -- but more educationally effective --  schools; or use it for countless other things they need or want.

But what if all this subsidizing -- even with its attendant waste -- resulted in impressive educational outcomes? Then maybe, just maybe, it would be an economic net gain.  But things look pretty bad: The six-year graduation rate for bachelor's degree seekers is just 57 percent; roughly one-third of first-year students need to take remedial courses; and literacy dropped (see p. 38) roughly ten percentage points for Americans with at least a bachelor's degree between 1992 and 2003. Oh, and that wage premium? It could very well include massive credentialism: It might be that you now need a bachelor's degree for jobs that require only skills or abilities you could have attained on the job or in relatively brief specialized training. But at this point even half-way decent prospective employees would be expected to have gone to a four-year college.

Enough conjecture, though. Let's go to the videotape -- an actual effort to isolate the effect of government higher-ed spending on economic growth. Economist Richard Vedder has done this, and what he has found is that the more a state spends on higher education, the lower its rate of economic growth. Why? Among other possible things, it seems that when education is largely funded by third parties -- especially third parties who have no choice in the matter -- it decreases schools' and students' motivation to act efficiently. So sure, build that on-campus water park -- I ain't really paying for it!

Looking at things this way -- contemplating the myriad costs, not just the assumed benefits, of taxpayer funding of education -- it seems maybe my ideas shouldn't be assigned a cell between the Joker and the Riddler quite so quickly.

But what about the equalitarian argument? Forget about economic efficiency -- what about justice for the poor?

First off, I'd note that freer, more efficient economic systems tend to be better for everyone, rich and poor alike. You can read all about that here. But we need look no further than American history to see that people -- including the poor -- will get educated without government help. Before there was widespread government schooling there was widespread education. Indeed, by 1840 -- when Mann's common-school movement was still in diapers -- it is estimated that 90 percent of adult whites in America were literate, a very high level relative to Europe. And the nation was hardly the Monopoly Man at the time. In other words, poor people got educated on their own.

But how could this be? Certainly part of the answer was that many poor people emphasized education, and much education occurred in the home. It was also provided by religious institutions, as well as philanthropists. And, of course, poor communities sometimes got together to establish their own schools.

Well, for one thing, education need not be nearly as complex and expensive as it is. All those computers and other bells and whistles? There is hardly overwhelming evidence that they do any good -- they may just be a huge waste of money. Meanwhile, many relatively barebones private schools seem to do just as good a job or better at educating students. Oh, and there's that charity thing again: Religious schools provide low-cost education to millions of kids, and it could be lower if they didn't have to compete with "free" public schools. And despite massive government subsidies to higher ed, private philanthropists give tens-of-billions of dollars to colleges and universities every year -- imagine how much they might give if government didn't say it would do the job! In other words, there is absolutely no overwhelming argument -- to say the least -- that just because the world is  more complicated government must run schools and pay for education. Indeed, huge, bureaucratic, plodding government is about the least well-equipped entity to handle complication and fast change.

And guess what? There is a profit-motive to furnish education to poor students with demonstrated academic aptitude: If someone lends money to a poor student to go to college so she can get an education that enables her to increase her future earnings, both parties will end up profiting. And let's not overlook India and numerous other developing countries, where many of the poorest people in the world, using their own money, attend for-profit schools that outperform the free public schools. And why is that? Because the parents whose valuable money is being spent have huge incentives to hold schools accountable, and schools have to respond to parents to stay in business.

But maybe all that's not enough for Mr. Yglesias. Maybe he needs to also be reminded of what he himself noted:

The current state of schooling in America is already bad enough in terms of ill-serving poor people.

That's for sure! Currently, wealthy people can choose schools: they do it by buying a house in a good district or paying for private schools. Meanwhile, poor parents are often trapped in awful schools because they can't afford to buy a McMansion for tuition. In higher education, flagship public colleges and universities have disproportionately middle- and high-income student bodies. And student aid? With creation of tax credit programs you have to have sufficient taxable income to use, as well as loans like PLUS that have no income maximums, aid has been targeted higher and higher up income scales. Meanwhile, the tuition inflation that all that fuels appears likely to scare low-income people away from higher education more than any other group.

Finally, let's not forget that it was government that for centuries prohibited millions of people -- especially African-Americans -- from receiving either an equal education, or any education at all.   Without question during those times many private Americans would have discriminated in the provision of education, but government required discrimination by both bigot and good man alike.

So the current education system --- which tends to be bent toward the will of the large, voting, middle- and upper-income blocs -- already massively underserves the poor, and quite possibly makes it much harder for low-income Americans to compete with rich people than if everyone paid for schooling themselves. The system also injects huge distortions and inefficiencies into education, hurting overall economic progress. Of course, this is not an open-and-shut case -- few things are in public policy -- but you sure need to do more than just call removing government from education "insane" to counter it. Unfortunately, that's not something it seems too many people -- including Mr. Yglesias -- are prepared to do.