Economists Fail at Forecasting and Micromanaging

In a new study, economist Mickey Levy included a chart illustrating the inaccuracies of Federal Reserve economic forecasts. Levy is with Berenberg Capital Markets and a member of the Shadow Open Market Committee.


The chart shows the Fed’s year‐​ahead projections for real GDP (gray bars) and actual GDP (red bars). The projections are often way off, which is remarkable since the Fed has hundreds of skilled economists and access to unparalleled statistical and anecdotal economic data. The Fed generally overestimated growth until 2016, but for 2017 it underestimated. 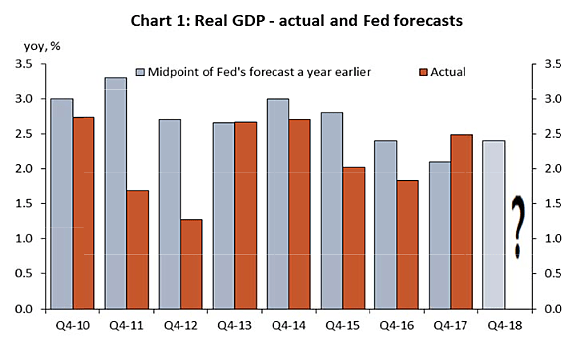 
“The clear pattern of the Fed’s forecasting errors reflects the Fed’s tendency through 2016 to over‐​estimate the stimulative impact of extending its unprecedented monetary ease well after the recovery was self‐​sustaining, and tendency to under‐​estimate the economic impacts of the government’s fiscal and regulatory policies and other nonmonetary factors.” By the latter items, Levy means “the government’s tax and regulatory policies that increased business operating costs, raised uncertainties and dampened business confidence.”


More recently, “There has been a marked change in regulatory and tax policies that have changed the economic landscape, and the Fed’s perspective on the economy seems to be lagging behind. The Fed’s forecasts understated the dampening impacts of tax policy and growing web of burdensome regulations through 2016, and those policy thrusts have now reversed. The pickup in economic growth—both business investment and consumption—beginning in 2017 has been supported by the shift toward deregulation and the associated sharp rise in confidence.”


I have noted that CBO economic projections are also pretty bad. The agency missed the onset of the last recession, and over a recent 15‐​year period its projections of real growth for the following year were 1.7 percentage points off, on average. That indicates huge errors given that the average growth rate during the period was 2.1 percent. (Discussed here.)


If the government cannot predict the future, it won’t be able to successfully micromanage the future through interventionist monetary and fiscal policies. That is especially true because government is such an inflexible institution and has trouble changing course. I discuss these themes in this study on government failure.


What then should policymakers do? Economist Adam Smith advised them to adopt the “simple system of natural liberty.” By removing government interventions “the sovereign is completely discharged from a duty, in the attempting to perform which he must always be exposed to innumerable delusions, and for the proper performance of which no human wisdom or knowledge could ever be sufficient; the duty of superintending the industry of private people, and of directing it towards the employments most suitable to the interest of the society.”