The Syrian Civil War has produced about 5.8 million Syrians seeking refuge or asylum elsewhere--a scale of population displacement unseen since World War II. Although the flow into Europe dominates the news, most of the registered Syrian refugees remain in the Middle East. Lebanon, Turkey, and Jordan are the main recipients of the immigration wave, receiving roughly 1.1 million, 2.7 million, and 640,000 Syrians, respectively. The Gulf States are hosting about 1.2 million Syrians on work visas but they are not legally considered refugees or asylum seekers because those nations are not signatories to the UNHCR commission that created the modern refugee system. Regardless, the humanitarian benefit of Syrians working and residing there is tremendous.

The movement of so many Syrians over such a short period of time should result in significant economic and fiscal effects in their destination countries. Below is a summary of recent economic research on how the Syrians have affected the economies and budgets for Lebanon, Turkey, Jordan, and Europe.

Syrian refugees are 24 percent of Lebanon’s population--the highest Syrian refugee to population ratio in the world. However, neither the Lebanese government nor the United Nations has established official refugee camps in the country and registration of new Syrian refugees stopped in May 2015. International NGOs provide humanitarian aid that benefits over 126,000 destitute Syrians, but significant funding shortages have left some Syrians living on less than half a dollar per day. To more efficiently provide aid, the United Nations High Commissioner for Refugees has divided the country into four areas: Mount Lebanon and Beirut, North Lebanon, Bekaa Valley, and South Lebanon. Most refugees have settled in the underdeveloped areas of the Bekaa Valley and North Lebanon because the Lebanese in these areas share many family ties with Syrians. Locals in these areas are struggling to accommodate Syrian refugees despite the family ties.

Many Syrians, especially those with more wealth and greater skills, are responding to the poor economic conditions in North Lebanon and Bekaa by moving to South Lebanon and Beirut where there are more job opportunities, higher wages, cheaper rents, and safer communities. Syrian entrepreneurs are also welcomed in these regions of the country.

Lebanon’s real GDP grew 2.5 percent in 2015, the best growth rate since the turn of the decade, despite losses of investment and tourism due to the Syrian civil war. Furthermore, a World Bank report noted that a 1 percent increase in the population of Syrian refugees increases Lebanese service exports by 1.5 percent, due in part to the so-called market size effect. In the Bekaa Valley and North Lebanon, the influx of Syrians has led to 60 percent reduction in wages because low-skilled Syrian and Lebanese workers are substitutes. Lebanese entrepreneurs are not hiring many Syrian refugees and prefer to blame Syrian-operated businesses for regional economic problems and sluggish growth. The Lebanese government responded in the Bekaa region by closing down Syrian businesses, worsening the employment situation.

In response to the constant inflow of Syrians, the Lebanese government established a new visa system for students, businessmen, and those sponsored by Lebanese citizens. Missing from their visa reforms, however, is a humanitarian visa.

The refugee crisis could have a less negative or maybe even a net-positive effect on Lebanon’s economy after more policy changes. While it is undeniable that wages have fallen in certain areas of Lebanon, there are many Lebanese government policies that have exacerbated that effect.  Here are some suggested reforms:

The influx of Syrian refugees into Jordan is equal to about 8 percent of that country’s population. Refugees are not evenly dispersed in Jordan with about 90 percent residing in the governates in the north of the country. Despite the significant population shock, unemployment rates are lower in these governorates than the rest of the country and they have been declining since the start of the Syrian Civil War. On the other hand, labor force participation rates in these governorates are also slightly lower. Overall, Syrian refugees have not had a significant effect on the labor markets in Jordan.

This better labor market outcome could stem from the Jordanian government deregulating the labor market in the face of the refugee surge. Since March 2016, Jordanian authorities have expanded work permit access to refugees using Jordanian Ministry of the Interior identity cards and UNHCR-issued asylum seeker cards, allowing many more Syrian refugees to work in the legal market. About 99 percent of Syrians worked in the underground economy prior to these reforms. This new policy is projected to expand work permit access to 78,000 Syrians in the short term and thousands more in the future. The Jordanian government has a long history of these types of labor laws as their constitution and guest worker laws attest.

These new work permits are better than unlawful employment but they often come with restrictions such as employer sponsorship and minor fees that make them difficult to obtain for some workers.  Fortunately, the pace of reform is increasing so hopefully those guest-worker permit barriers are further pared down. Syrian workers who entered the country legally and were not residents of a refugee camp could apply for work permits--a big policy shift for the 83 percent of refugees who are not in camps.

The Jordanian housing market has suffered the greatest shock as rents and prices have climbed in response to the refugees. According to one projection, those rents have grown by 7.73 percent since the beginning of the Syrian crisis--an estimated 5 percentage points higher than if the refugees had not arrived. This effect is unsurprising as the housing market is more affected by immigrant inflows than any other market.  Refugees aside, the Syrian Civil War and Arab Spring have dampened Jordan’s tourist and trade markets, likely slowing export growth.

The fiscal effects of the Syrian refugee crisis are acute. The Jordanian government supplies a substantial amount of social services and welfare benefits to the Syrians. They consumed an estimated 8.8 percent of the government budget through healthcare, education, and security services. While that number is slightly higher than the Syrian percentage of the population, this estimate was also made in 2014 before the changes in work permit policies.

There are additional policy steps the Jordanian government can take to maximize the benefits from welcoming refugees while minimizing the costs:

Turkey is currently hosting 2.7 million Syrian refugees, more than any country in the world. Unlike Jordan and Lebanon, however, Turkey has a much larger population base and a more robust and developed economy. While there are established refugee camps, 85 percent of the Syrian refugees in Turkey have left the camps and found work in the formal and informal markets.

Lower-skilled Syrian workers in the informal market have displaced similarly skilled Turks and increased unemployment in areas where they are concentrated by about 2 percentage points. The government’s restrictive work permit policy likely led to that negative effect. The Turkish government issued regional permits allowing refugees to work only in the refugee community,which concentrated the increase in the supply of labor rather than letting the workers fan out into the Turkish economy. Refugees not employed in the community either had to seek informal employment or rely on state aid. As a result, the government had to spend an additional $5 billion for the refugees.

Since January 2016, Turkey has taken steps to allow Syrians to work legally. Syrian workers are now allowed to comprise a maximum of 10 percent of the employees in any firm and are subject to minimum wage requirements. While the full effects of this new policy have yet to be measured, some Turkish politicians have recognized the economic benefits of Syrian entrepreneurship and a growing labor market. Legalizing Syrian workers will likely ensure the further decline of the informal market, which has shrunk almost 7 percentage points between 2011 and 2014.

Overall, the Syrian refugees have had a modestly positive impact on Turkey’s economy. Turks have responded to the population shock through occupational upgrading, as the expanded consumer base has created new opportunities for higher wage formal jobs.

Turks have also responded to increased labor market competition by seeking skill upgrades to make themselves complementary to the new Syrian workers. The percentage of Turks in higher education increased from 20 percent to 23 percent from 2011 to 2014.  School attendance has increased for Turkish women as well,  though those effects may have occurred as a result of other changes in government policy. Turks who directly compete with low-skilled Syrians and don’t change occupation do face some job displacement and wage declines, but the average wage increases as they shift to higher wage jobs. Furthermore, as more Syrians participate in the market, consumer prices have dropped an average of 2.5 percent since 2011 because of increased competition at the lower end of the labor market has made goods more affordable for every Turkish consumer.

Turkey has handled the Syrian refugee surge better than any other neighboring country. Endogenous factors such Turkey’s larger population and more developed economy deserve enormous credit, but Turkey’s recent labor market liberalizations also helped. Turkish occupational upgrading, made possible by a larger labor market, is the best possible result. There are some policy changes the Turkish government can make to further increase the benefits and diminish the costs of the Syrian refugee crisis:

There have been 972,012 Syrian asylum applications in Europe between April 2011 to February 2016. Sixty-one percent of them are hosted by Serbia, Kosovo, and Germany, while 27 percent are hosted by Sweden, Hungary, Austria, the Netherlands, and Denmark.

European governments have responded to this influx by increasing fiscal expenditures to accommodate the refugees and provide humanitarian assistance. Increased social expenditures are likely to continue even if optimistic estimates find that 10-15 years are necessary before refugees begin to be fiscally positive. For 2015-2016, the European Commission allocated additional funding of 9.2 billion euros in order to address the refugee crisis. The scale of the funding could be decreased and the time until fiscal balance could be diminished drastically through better labor market integration.

Optimistic projections of refugee integration assume they will have a labor force participation rate 5 percent lower than similarly skilled natives. The refugee unemployment rate is currently 30 percent and well above 50 percent for asylum seekers in Germany, Britain, and France. Unemployment for these groups is even higher in non-EU European countries. 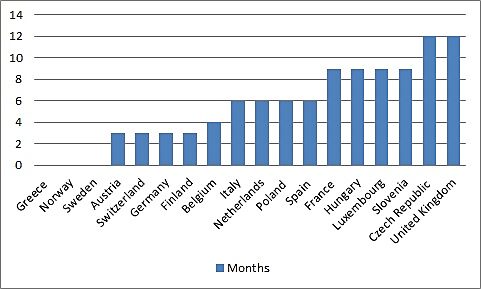 Egregious labor policies in the European Union are the roadblock to refugee integration. As such, there are many reforms European nations should undertake to lessen this problem:

The Middle Eastern countries with substantial Syrian refugees have all responded with similar reforms, to different extents. Turkey and Jordan have done the most to integrate Syrians while Lebanon has done the least. Lessening government barriers to legal employment and entrepreneurship have made the situations better in those destinations. Europe is still struggling, and their sclerotic labor market regulations do not bode well for successful integration unless some serious reforms are undertaken.