Since the passing of Muhammad Ali, the establishment has been working in overdrive to convince us that the great boxer was a member of their club. In doing so, the wisdom and wit of Ali has been on display.

Muhammad Ali’s lessons on economics, however, have been absent. Economics? Yes. The lessons were developed in a most edifying book by Donald Sull, The Upside of Turbulence: Seizing Opportunity in an Uncertain World. New York: Harper Collins, 2009 – a book that Mohamed El-Erian recommended to me.

The economic lessons are summarized in “The Boxer Matrix.” A boxer’s fate is determined by a combination of his absorption capacity (read: can he take a punch?) and agility (read: can he avoid a punch?). In the Boxer Matrix, the ideal position to be in is the Northeast quadrant: where Ali and Joe Louis boxed. But, while Ali always had terrific agility, he had to train and think his way to an above average absorption capacity. This capacity was on display in his “Rumble in the Jungle” bout with George Foreman. It was then that Ali’s “rope-a-dope” tactic was executed to perfection.

This brings us to Ali’s message on economics, with particular reference to countries that are heavily dependent on the production of oil. In turbulent times (read: oil price plunges), countries like Saudi Arabia, Venezuela, and Nigeria experience a great deal of pain because their oil-dependent economies aren’t diversified. In short, they lack agility. This is reflected in their position in the lower half of the Boxer Matrix.

Saudi Arabia is able to use its huge stash of foreign reserves (high absorption capacity) to countervail its lack of agility. But, reserves can only go so far. What the Saudis need is more agility. The Vision 2030 project is intended to do just that. Whether the Saudis can endure the “training” required to achieve Vision 2030 is another matter.

As for Venezuela and Nigeria, they are – and are likely to remain – in the loser’s Southwest quadrant: the one that dooms boxers and economies alike. 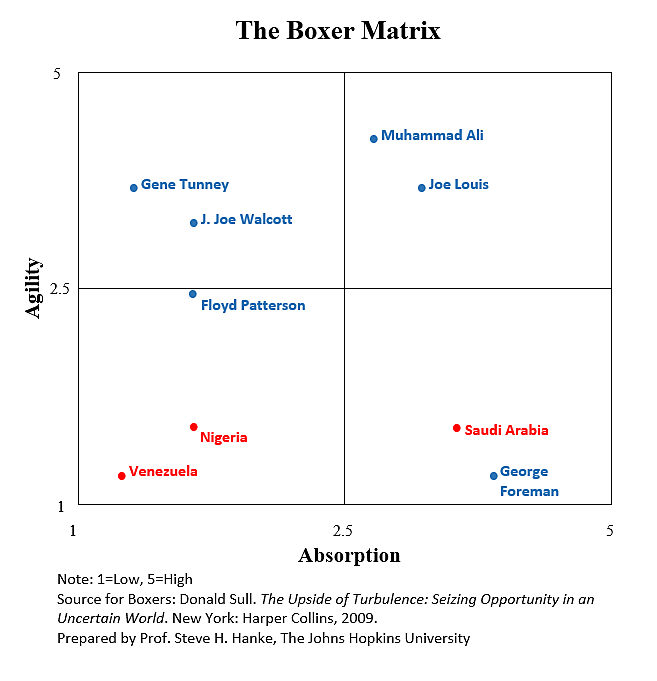