Today Cato released the Economic Freedom of the States of India 2011 report (co-published with Indicus Analytics and the Friedrich Naumann Foundation) in Washington and New Delhi. India has been growing at high rates since it implemented market reforms in the early 1990s thus notably improving its level of economic freedom.

Yet India is an enormous country with some regions making more progress than others. The new report shows that there is a great diversity among Indian states in terms of economic freedom. Parallel to the findings of the Economic Freedom of the World report, the new study on India finds that states with more economic freedom tend to have better economic performance. As the graph shows, states that have increased their level of economic freedom in the past five years have also tended to grow faster. 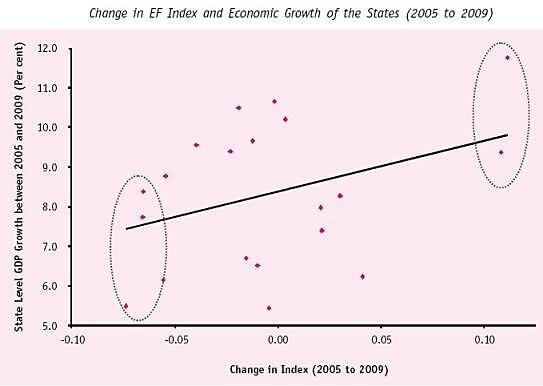 Andhra Pradesh, India’s fifth largest state with a population of 84 million people, is the state that most increased its level of economic freedom since 2005, achieving an average annual growth rate of more than 9 percent. My colleague Swami Aiyar, co-author of the report, documents how that government reduced the level of its spending as a share of the economy and has made it easier to do business.

India has a long way to go before establishing a free economy (it ranks 87 out of 141 countries in the economic freedom index), and the current government has been rightly criticized for not pushing forward further necessary reforms of the kind that have led to high growth. We hope this new report will show that Indian leaders at the state level can still do much to improve economic freedom despite the national government’s lacking reform agenda.