The Economic Consequences of the ACA Notch

There is great interest in how the labor market will respond to the Affordable Care Act (ACA). Much of the popular discussion focuses on the implications of the newly-implemented and widely-anticipated employer mandate, which requires firms with 50 or more workers to provide health insurance for full-time employees (defined as workers with 30 or more hours per week). The employer mandate, unsurprisingly, creates strong incentives for companies to scale back employee hours (“29 hour work weeks”) and lay off workers or consolidate part-time jobs into full-time jobs in order to get under the 50 employee threshold.

There is comparatively less discussion of the incentives faced by workers. Although the Congressional Budget Office has provided estimates and discussion of the pertinent labor market effects, one issue that tends to get lost in all of this is how increasing a household’s income creates certain “notches” in a household’s budget constraint. By “notches”, economists mean very large changes in the subsidy (known as the “Premium Tax Credit”) received by a household for extremely small changes in income. These notches are well known in other transfer programs, particularly the “Medicaid notch” and the “public housing notch”. The ACA notch occurs in both states that expanded their Medicaid program, as well as those that didn’t.

To illustrate the sheer magnitude of the ACA notch, it is helpful to examine ACA subsidies for different individuals. First, consider a person who is expensive to insure – a 64-year-old – in a locality that generally has high insurance premiums. A good example is Clay County, Georgia (where Georgia also didn’t expand its Medicaid program). As the “Plan Preview and Price Estimator” from the federal government’s exchange shows, the premium tax credit goes up dramatically for this individual at an income of $11,671 and falls dramatically at an income of $46,679.

Now You See It, Now You Don't
The premium tax credit appears when income reaches 100% FPL 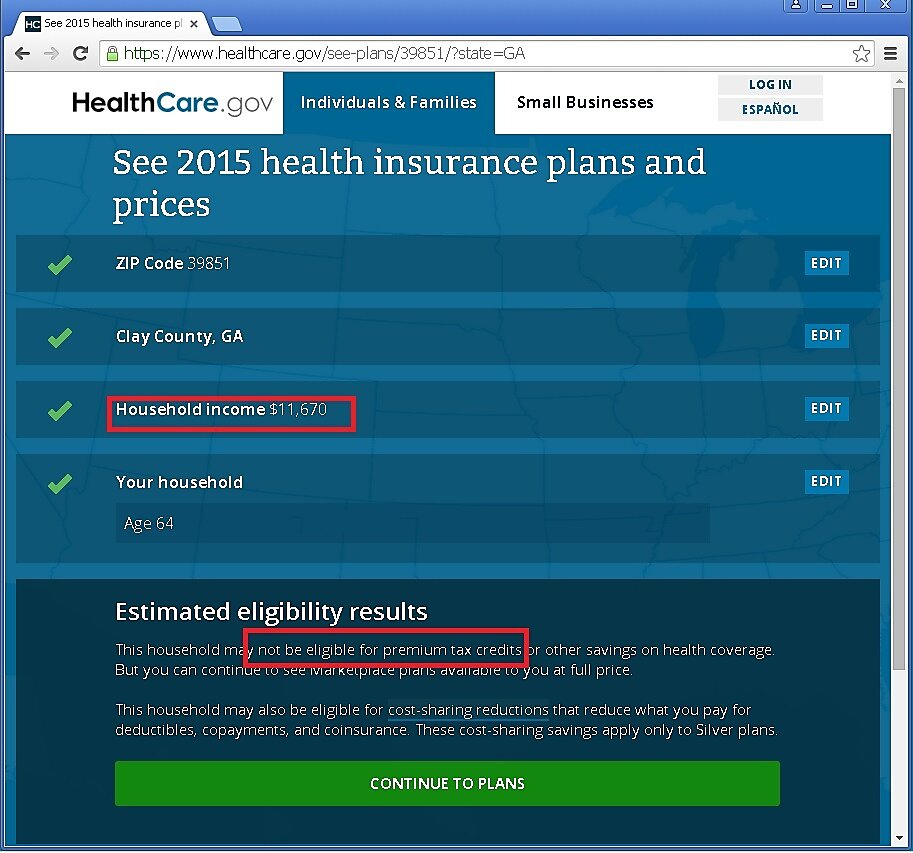 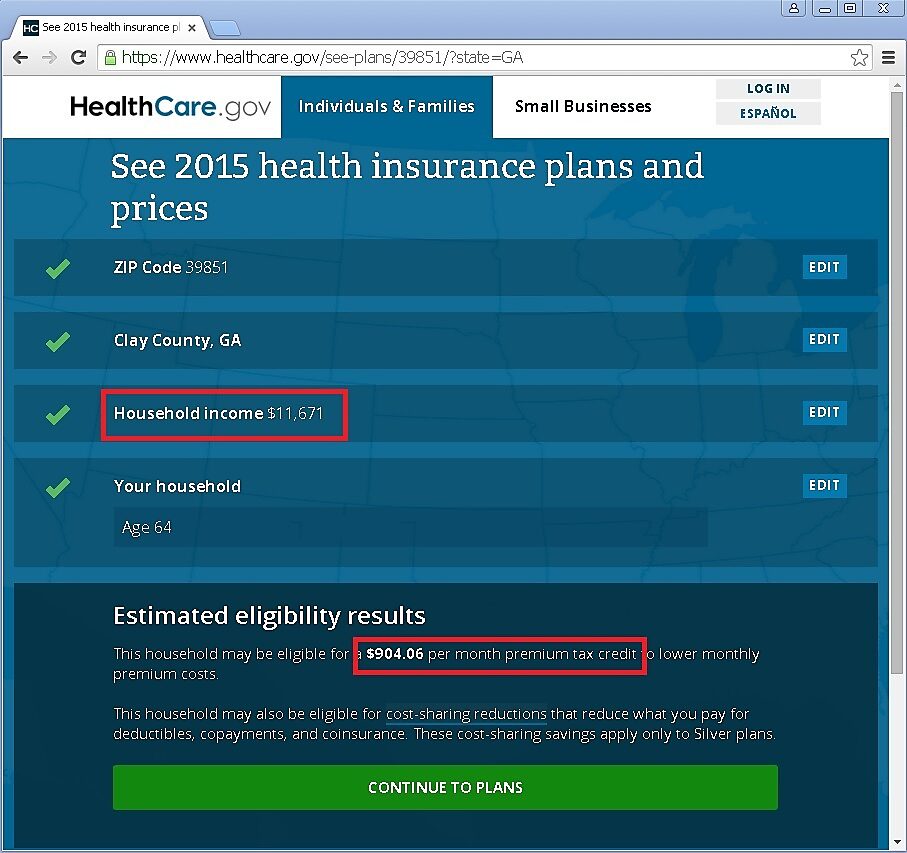 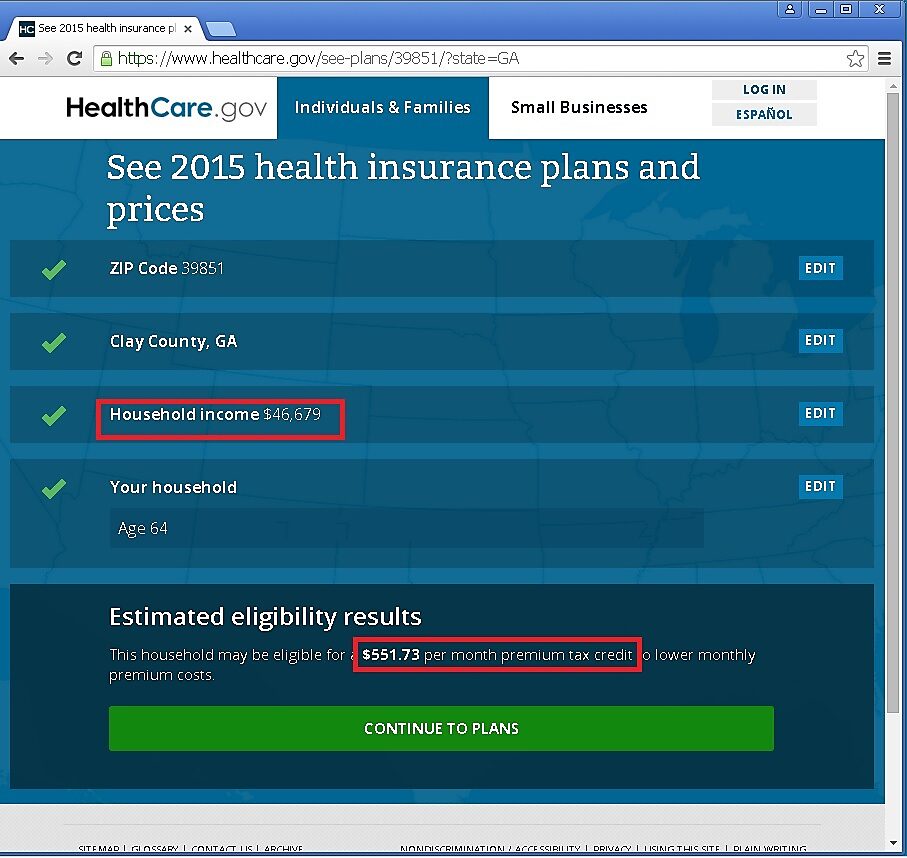 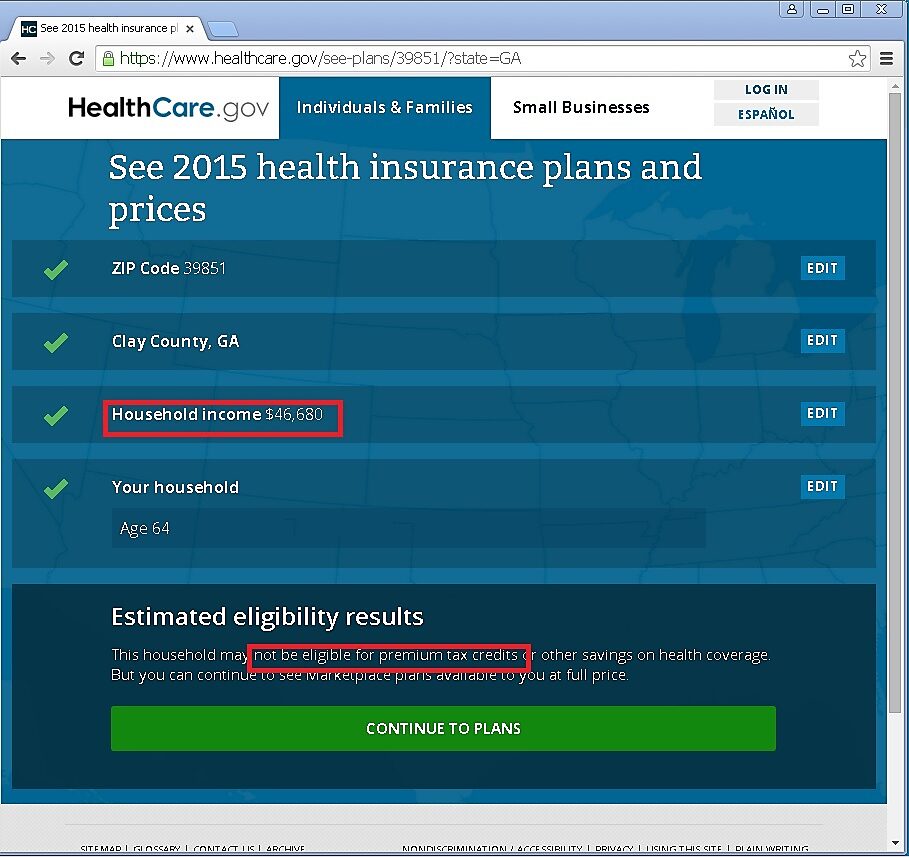 What’s going on? Subsides – discounts off the premiums for health plans offered on the exchange (known as the premium tax credit or “PTC”) – are related to household income as well as cost factors (namely an individual’s age and price of health plans in the local marketplace). Subsidies kick in at 100% of the Federal poverty line – or $11,671 for a one-person household – and turn off at 400% of the Federal poverty line – or $46,679. Thus, small changes in income lead can lead to very large changes in the subsidy.

Before discussing the labor market consequences, it is important to note that such ACA notches are more important for expensive-to-insure individuals and couples, and the size of the ACA notch also varies by location. The following table shows a high-cost individual (the 64-year-old) and a low-cost individual (a 30-year-old) in a high-cost location (Clay County, GA) and a lower-cost location (Andersen County, TN). 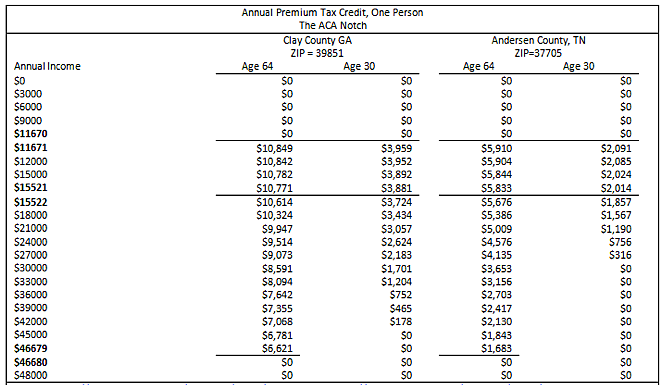 How do things look for married couples? Much like single individuals, the subsidies kick in and turn off at multiples of the Federal poverty line. Although the unsubsidized cost of a health insurance plan for two 64-year-olds is twice that of one 64-year-old, the dollar amounts for the poverty thresholds are quite different. The dollar amounts go up less than proportionally with family size. As a consequence, the notches look quite different – and in some cases are jaw-dropping – for a married couple. Consider the two areas we just considered, and assume that two individuals of the same age are married to each other. The first column in the next table shows that the ACA notch when reaching 100% of the Federal poverty line (of $15,731) is an incredible $21,850! That is, earning the extra $1 that brings income from $15,730 to $15,731 leads to a dramatic increase in the premium tax credit. The magnitudes are clearly different, but present, for all family types illustrated. As family income goes from $15,731 to $62,919 (or 100% to 400% of the Federal poverty line), for all couples, the subsidy more-or-less is smoothly taxed away (and in, fact, the young couple in the inexpensive market loses its subsidy before 400% of the Federal poverty line). For the first couple, as income goes from $18,000 to $60,000, the PTC falls by $5,374, resulting in an average tax rate from the ACA alone of 12.8%. The notch for older couples is dramatic at 400% of the Federal poverty line; in Clay County, GA, earning the extra $1 that takes income from $62,919 to $62,920 results in a loss of subsidy of $16,152! The results in Tennessee are also large, but not nearly as large as Georgia. In Tennessee, the older couple only loses $6,275 for earning the extra $1. Younger couples don’t completely escape this punitive tax. For younger couples, the ACA notch exists in Georgia, but the PTC is eroded completely in Tennessee before income reaches 400% of the Federal poverty line, so there is no ACA notch. 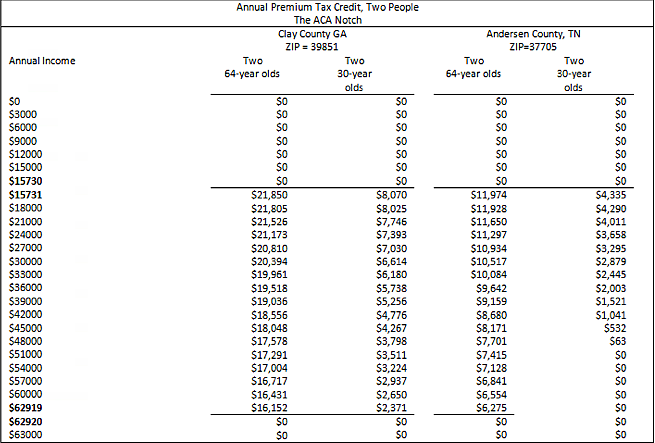 It is also the case that this structure creates unusual marriage taxes and bonuses, an incentive that has been examined in the context of Medicaid expansions from an earlier era. To illustrate, imagine that two unmarried, 64-year-olds in Clay County, GA each had annual income of $10,500. The first table illustrates that neither would be eligible for the PTC. By marrying, household income is $21,000, resulting in a premium tax credit of $21,526. However, not all couples look so good. Consider these same two individuals, each earning $33,000. As single individuals, they each receive a premium tax credit of $8,094, or a cumulative amount of $16,188. By marrying, their credit would fall to $0, because household income would exceed the limit of 400% of the Federal poverty line. Evidence from the ACA mandate to cover young adults shows that marriage taxes and bonuses are an important factor. 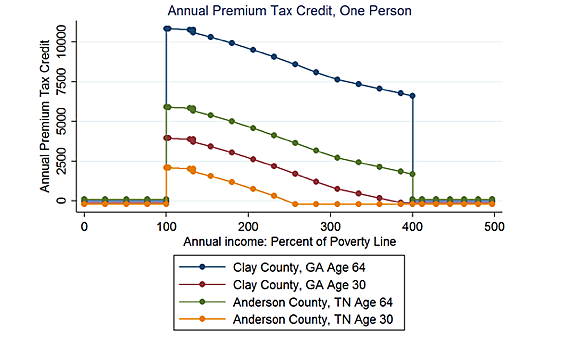 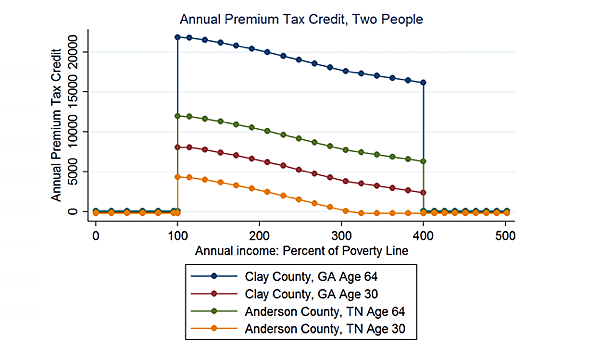 Yelowitz, A., “The Medicaid Notch, Labor Supply and Welfare Participation: Evidence from Eligibility Expansions,” The Quarterly Journal of Economics, November 1995, 110(4): 909-939.

Abramowitz, J., “Saying ‘I Don’t’: The Effect of the Affordable Care Act Young Adult Provision on Marriage,” Accessed from: https://appam.confex.com/appam/2014/webprogram/Paper10104.html