I have an op-ed in Politico about “earmark donor states.” It’s a term I invented to highlight a rarely discussed side of earmarking: public choice economics.

As public choice theory would predict, the earmarking process operates under a system of concentrated benefits and diffuse costs.  Based on an analysis of 2009 data, 16 states receive a disproportionately large percentage of the earmark pie and can be labeled “earmark beneficiary” states. The other 34 states and the District of Columbia are “earmark donors,” as they receive fewer earmark dollars than they proportionally should.

To determine which states win and lose in the earmarking game, I looked at the share of taxes each state sends to Washington and compared it to the share of earmarks that each state receives.

In the op-ed, I use Colorado, one of the biggest earmark donor states, as an example:

Colorado taxpayers contribute about 1.6 percent of total federal taxes, but they receive just over two-tenths of one percent of earmarked funds—proportionally speaking, less than a third of what it should be getting. This works out to more than $200 million dollars that Coloradans are spending to subsidize earmarks in other states – hardly chump change. So while Colorado’s representatives might pat themselves on the back for securing funding for an occasional municipal bus or bioenergy plant, their earmarking rivals in other states like West Virginia and Hawaii obtain funding for larger and more expensive projects and send the bill to the Centennial State.

Below is a table with additional data indicating which states are earmark donors and recipients.  The key column is the “earmark ratio.” The lower the figure, the smaller a state’s share of earmarks is relative to the amount of taxes its residents and businesses pay.  A state with an earmark ratio below 100% is a donor state.  As you can see, Utah is the first state on the table that receives slightly more than its proportional share of earmark funds. Mississippi, the last state on the list, remarkably receives 11 times more than its proportional share.

Also note that the most populous states in the country are earmark donors – almost 90 percent of Americans live in earmark donor states.

Suspecting that the disparity between states is a product of political clout, I calculated the percentage of each state’s congressional delegation serving on the House and Senate Appropriations Committees.  The graph below shows the correlation between this metric and the earmark ratio of each state. The closely tracking trend lines suggest there is a connection between a state’s representation on the Appropriations Committees and earmarks. The correlation between these figures is 0.264, which is especially strong when you consider that earmarking proponents often argue that the process is entirely merit-driven and apolitical.  To be sure, this is a very rough indicator – earmark recipient states like Alaska and West Virginia were long represented by earmark champions Ted Stevens and Robert Byrd, neither of whom is included in the figure.  Also, it should be noted that Hawaii and Mississippi are represented by Daniel Inouye and Thad Cochran who, respectively, are the chairman and ranking Republican on the Senate Appropriations Committee.  As such, they carry significantly more clout than the average appropriator. Additionally, Nevada’s status as an earmark beneficiary state despite its lack of appropriators might be explained by Senator Harry Reid’s influence as Senate Majority Leader.

I also evaluated the correlation between earmark ratios and median income. Based on the arguments of earmark proponents, one would expect a very strong negative correlation here as earmarking is intended to direct federal funds to needy, underserved parts of the country.  The strength of that correlation is -0.255, which is slightly weaker than the political-based correlation.  This suggests that in the earmarking process, political power is more important than financial need. 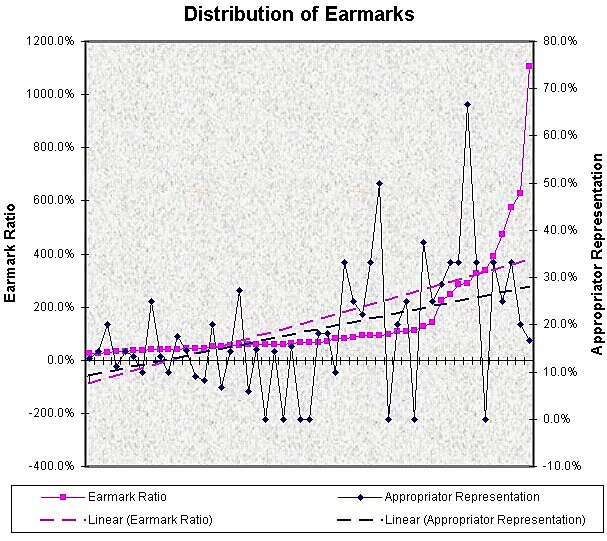 The connection between political power and earmarking prowess is hardly surprising. More startling is the disparity between the shortchanged earmark donor states and the earmark beneficiary states. Perhaps politicians from donor states are unaware of the extent to which their constituents subsidize out-of-state projects. More likely, most congressmen are successfully pulling off a political sleight of hand – trumpeting their occasional earmark project and hoping it distracts their constituents from the disproportionately large number of earmarks in other states.

After all, the vast majority of Americans would be far better off if Congress stopped earmarking and removed itself from spending decisions that should be made by local governments and private entities.

I must acknowledge several of my colleagues who helped with this analysis – many thanks to Kurt Couchman and Andrew Mast.