On Wednesday, the Congressional Budget Office (CBO) released a cost-estimate for the Legal Workforce Act (H.R. 1772). That bill is one part of the House Republican’s immigration reform package that would nationally mandate a version of E-Verify. 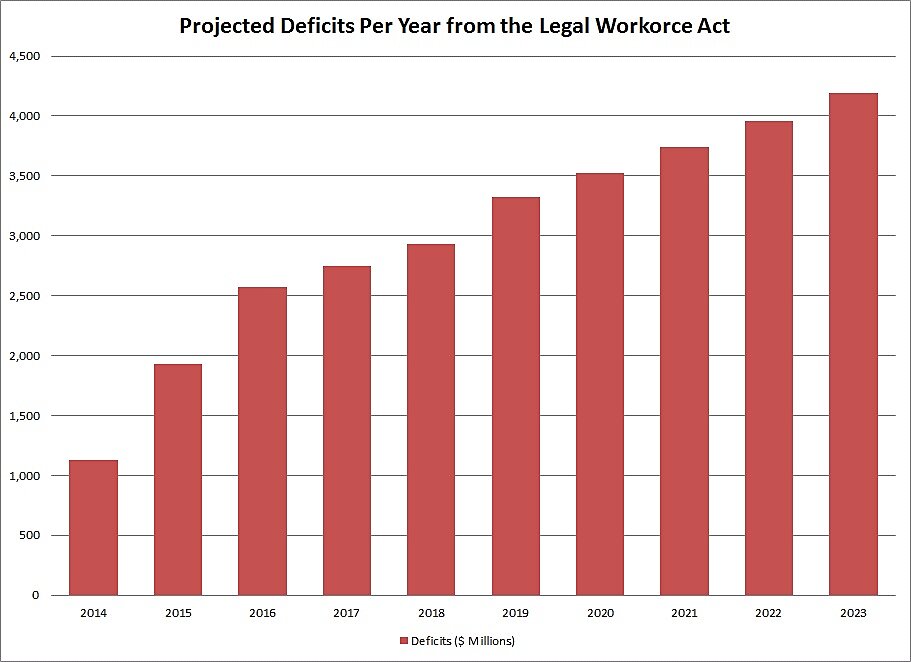 CBO notes that many unverifiable employees will be pushed deeper into the underground economy by E-Verify – something that is already occurring in states that mandate its use. Some employers would no doubt continue to pay unverified employees, but would do so off the books and off the radar of the IRS and Social Security Administration. While the government would receive an expected $49 billion in on-budget revenues from new sources of income tax revenue and payroll tax revenue from 2014 to 2023, it would lose $88 billion in off-budget revenue during the same period – mostly from Social Security payroll taxes lost as workers join the underground economy. That’s a $39 billion net loss to revenues due mainly to E-Verify.

My colleagues and I have written extensively about the threat that E-Verify poses to employees, employers, and civil liberties. The CBO estimates that expanding E-Verify would cost the federal government $635 million over the 2014-2018 period, followed by a similar amount from 2018 to 2023. That translates to roughly $1.2 billion in new hires, data retention systems, enforcement tools, and other goodies for the Department of Homeland Security.

The Legal Workforce Act would also impose costly new mandates on state and local governments and the private sector. The CBO estimates at least $10 million in total annual costs to be imposed on state and local governments that will be forced to comply (currently, only 20 states mandate the use of E-Verify for new public hires). And the office estimates a minimum cost of $200 million annually from 2016 to 2018 for private sector employers as they struggle to verify an estimated 50 million employees.

The Legal Workforce Act imposes new costs on the federal government, on state and local governments, on employers and employees, and will push some workers further into the underground economy – all without (thankfully) achieving its core objective of excluding unauthorized immigrants from the workforce. While the CBO may not be known for its accurate fiscal projections, the inevitable net fiscal costs of this bill make it hard to draw anything positive from this recent report.

This post was written wtih the help of Scott Platton.