A Double Dip for Housing?

Washington is fretting this week over news that mortgage applications fell dramatically in November. Coupled with earlier indications of renewed softening in the housing market, there is growing fear that housing is headed for a "double-dip downturn" that could further damage the economy. As a result, Federal Reserve policymakers are considering additional stimulus, while the National Association of Realtors is suggesting an(other) extension of the "temporary" homebuyer tax credit.

Remarkably, neither policymakers nor the media are asking the obvious question: Given all of the emergency interventions in housing that government has undertaken, and the fact that the housing market continues to erode, do such interventions do much good?

Since the bursting of the bubble in 2006, the great unknown has been whether housing prices will revert to their historical trend (and possibly to below trend for a short period), or stabilize at some permanently higher level because a portion of the bubble (aided perhaps by public policy) would prove enduring. There is good reason to expect reversion to trend, but the economy can surprise us.

Let's use an example to understand this better. The graph below depicts the course of house prices for my hometown of Hagerstown, MD, an area within commuting range of suburban DC that was hit particularly hard by the bubble and its deflation. The black line is a house price index computed by the Federal Housing Finance Agency for 1989–2009. The red line is an extended linear trendline drawn using index data from the period 1989–2002. (You can do the same analysis for your area using these FHFA data.) The question, then, is whether house prices will fall all the way back to the trendline or will stabilize at a level above the trendline. 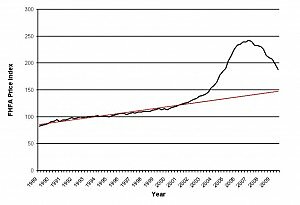 The sharp downward slope at the end of the price line and  the latest housing news suggest that Hagerstown is destined to revert to trend (perhaps after a period below trend). I've drawn similar figures for several other locations and they show similar patterns. It looks like the nation's housing markets, for the most part, are reverting to trend.

When this crisis first began in 2007, Bush administration officials vowed to "stabilize house prices at the highest possible level." However, despite their efforts and those of the Obama administration, Congress, and the Fed,  reversion to trend appears inevitable. At best, those efforts may have slowed the reversion — in which case, I suppose the Bush goal has been met.

It can be argued that a gentler reversion to trend may be more tolerable than a sharp return. On the other hand, there are fears that a lengthy softening of the housing market will lead to more defaults, less worker mobility, continued weak consumption, and a long period of high unemployment and stagnant wages for those who are working. Perhaps a sharp return would be the quickest way to shed the ill effects of the bubble.

This leaves us with a final question that policymakers, the media, and the public should be grappling with: If all of these emergency housing interventions only result in a slower reversion to trend, then is that benefit worth the cost?