More Cubans will flee their island to the United States this year than any year in decades, according to new data obtained by the Pew Research Center. But the flow should not be exaggerated. The United States has handled much larger influxes of Cubans in the past, and the large Cuban American community in the United States is fully capable of integrating the newcomers. Moreover, Cuban asylees are not attempting to sneak into the country, but rather presenting themselves for security checks to agents at ports of entry.

As can be seen in Figure 1, net Cuban immigration was at its highest level in the 1960s following the communist takeover of the Island. From 1960 to 1970, the number of Cuban immigrants living in the United States grew more than fourfold—by nearly 360,000, according to the Census Bureau. No decade has seen such rapid growth in percentage or absolute terms. Since 1970, the U.S. Cuban‐​born population has grown more gradually to reach almost 1.2 million in 2014. 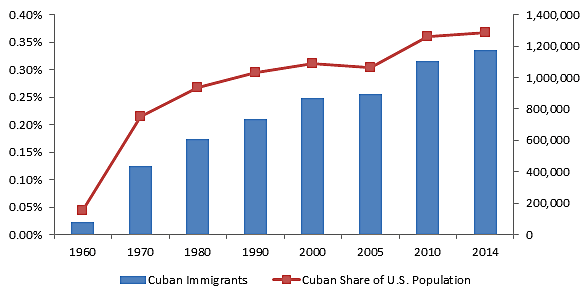 Figuring out the number of annual arrivals is much more difficult. The immigration service keeps the number of aliens obtaining lawful permanent residence (LPR) each year, so that gives an approximation of the number of newcomers. Because the Cuban Adjustment Act requires Cuban immigrants to wait a year to apply for LPR status, however, the numbers reflect arrivals that occurred earlier. This impacts the figures in the 1980s most significantly. More Cubans arrived in 1980 than any other year on record, 125,000 in six months alone, but the surge overwhelmed the service and it waited until 1985, 1986, and 1987 to process their LPR applications.

While imprecise, the LPR numbers give us some context. In terms of annual in‐​flow, the United States saw much greater influxes in 1968, 1977, and 1980. On a per‐​capita basis, this year will likely see less than half the rate of immigration in1968 and 1980. 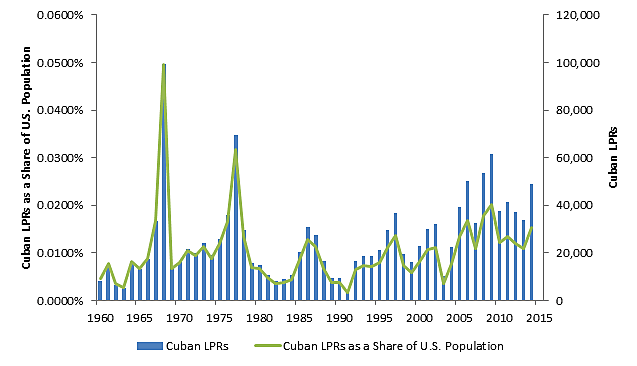 The LPR figures also don’t indicate how the person came to the United States—whether they presented themselves at a port of entry, were apprehended crossing the border, or came with a visa. Over the last decade, roughly 60 percent of all Cubans identified by DHS presented themselves at a legal point of entry—such as an airport or border crossing station—without a visa, compared to just 14 percent who were apprehended without documentation away from a port. The other 26 percent came to the United States legally, either as refugees or immigrants.

Figure 3: Mode of Identification of Cubans Arriving in the United States by Homeland Security 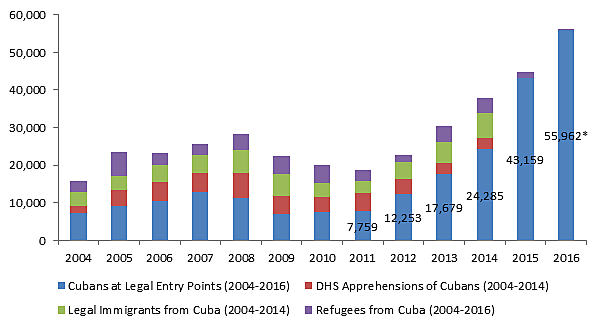 The reason that Cubans present themselves at ports of entry is that the vast majority receive legal permanent residency through the Cuban Adjustment Act (CAA) of 1966, which grants Cubans asylum automatically upon reaching land in the United States. The CAA obviates the need to avoid detection and immigrate illegally. After one year in asylee status, Cubans can adjust to permanent residency. Overall, roughly three quarters of all Cuban immigrants since 1960 have used this law to receive permanent residency in the country. 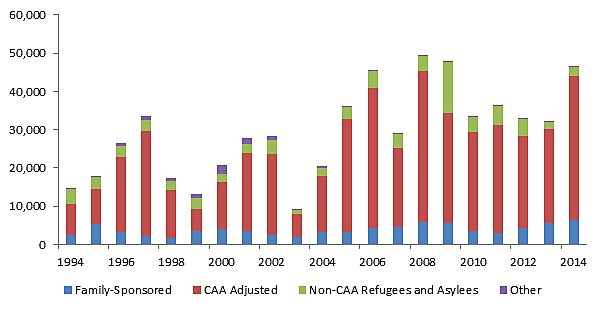 Although the increases in Cuban arrivals in the past couple of years are dramatic, they are not unprecedented or alarming from the standpoint of how they are occurring. Americans should and will welcome them just like they have welcomed each wave of Cubans who escaped the communist island in the past.