Donald Trump and the Gift of Fear 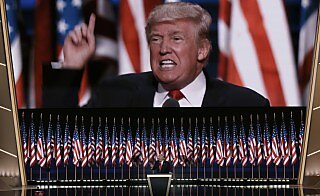 The prospect of Donald Trump as president is only slightly less ridiculous than the idea of Charlie Sheen with nukes—and possibly more frightening. And yet, it looks as though the verbally incontinent celebreality billionaire has a one in three chance of being elected come Tuesday.


Terrifying, yes, but fear can be useful. In this case, it ought to concentrate the mind wonderfully: if someone so manifestly unfit, so transparently likely to abuse power, can come within striking distance of the presidency, then maybe it was a bad idea to concentrate so much power in the Oval Office in the first place.


It’s no secret that the “most powerful office in the world” grew even more powerful in the Bush‐​Obama years. Both presidents stretched the 2001 Authorization for the Use of Military Force into a wholesale delegation of congressional war powers broad enough to underwrite open‐​ended, globe‐​spanning war. Bush began—and Obama continued—the host of secret dragnet surveillance programs revealed by Edward Snowden—and others we’re still largely the dark about. And lately, on the home front, Obama has used the power of the pen to rewrite broad swathes of American law and spend billions of dollars Congress never appropriated.


America’s center‐​left papers of record have lately begun to notice that the vast powers recent presidents have forged would be available to Trump as well. The New York Times’s Carl Hulse writes that Obama’s assertion of a presidential power of the purse could have ”huge consequences for our constitutional democracy.… How would lawmakers react if a willful new chief executive, unable to win money from Congress for a wall on the Mexican border, simply shifted $7 billion from another account and built it anyway?” And a month ago, the Washington Post kicked off a series of half a dozen editorials warning what would befall the republic should Trump ascend to Real Ultimate Power: “A President Trump could, unilaterally, change this country to its core,” the Post’s editorialists argued, and the other branches won’t be able to stop him: “in the U.S. System, the scope for executive action is, as we will lay out in a series of editorials next week, astonishingly broad.”


It was nice to see the Post editorial board, which had called Obama’s recess‐​appointments gambit “a justifiable power grab,” evince some concern about potential abuses of executive power. Through five more editorials, they’d go on to observe that a President Trump could, among other abuses: “launch wars”; “take the oil”; “assassinate foreigners who opposed him”; issue a secret legal opinion overturning the torture ban; “launch surveillance programs targeting foreigners without informing Congress”; pull out of NAFTA, start a trade war, and “destroy the world economy.” An imposing parade of horribles, all leading up to the limpest of takeaways: “the nation should not subject itself to such a risk.” In other words, don’t vote for Trump. OK, then: Problem solved?

I don’t disagree with the Post’s argument that Trump represents a unique threat to what remains of constitutional government. But whatever happens on Tuesday, we’re sure to be facing a deeply unpopular, ethically challenged, and potentially abusive president. Hillary Clinton has, you may have noticed, a penchant for all the secrecy she can “get away with,” a hairtrigger enthusiasm for “dumb wars,” and a Nixonian ruthlessness that some of her supporters consider a virtue. A broad majority of Americans—far more than will end up voting for Trump—distrust Hillary Clinton, the second most reviled candidate in the history of polling. Are they wrong to worry about her having the power to “unilaterally change this country to its core”? Should anyone have that kind of power?


If Hillary Clinton is elected Tuesday, will centrists and liberals manage to keep in mind just how close we came to handing unchecked power to a figure like Donald Trump? Or having careened right to the edge of the cliff, are they just going to blurt: “Crikey: that was a close one!”, and go on to cheer every “justifiable power grab” Clinton undertakes? I worry about the answer to that question, but I’d like to think that all the recent hand‐​wringing about unchecked executive power will lead somewhere.


In 1967, Arthur Schlesinger Jr., erstwhile court intellectual to JFK, and dean of the liberal historians, had a minor epiphany. As he put it in his journal, “It is evident now that this delight in a strong presidency was based on the fact that, up to now, all strong presidents in American history have pursued policies of which one has approved.” There was an artful evasiveness to that third‐​person formulation: Schlesinger had earlier backed Harry Truman’s claim of unlimited war powers, and would only publish his classic The Imperial Presidency when a Republican, Nixon, was in the White House. (It’s a shame when a man feels like he has to dissemble to his own diary.) But Schlesinger’s point stands: partisan myopia forged the Imperial Presidency, in his day and ours.


Conservatives pushed for a stronger presidency during the era of the Emerging Republican Majority, believing they’d hold the office more often than not. They pushed even harder during the second Bush presidency, passing on a presidency with radically enhanced powers to Barack Obama. Liberals, in turn, adopted a “what‐​me‐​worry?” attitude toward unchecked war powers, so long as Obama was in charge, and cheered 44’s promise to govern via the pen and the phone.


But, as Jonathan Turley observed last December: “While the policies [one favors] may not carry over to the next president, the powers will.… The problem with allowing a president to become a government unto himself is that you cannot guarantee who the next president might be.”


It’s an insight that should be blindingly obvious to anyone capable of thinking past a single presidential election cycle, but one that’s seemed beyond the ken of most political elites. If the next president can turn out to be a tyrant, then “tyrant‐​proofing the presidency,” in Conor Friedersdorf’s phrase, is our most pressing political task.