Does Marijuana Legalization Cause Pedestrian Fatalities?

A recent report from the Governors Highway Safety Alliance suggests that the legalization of recreational marijuana in many U.S. states has been associated with increases in pedestrian traffic fatalities. To substantiate this claim, the report cites that:

“[t]he seven states (Alaska, Colorado, Maine, Massachusetts, Nevada, Oregon, Washington) and DC that legalized recreational use of marijuana between 2012 and 2016 reported a collective 16.4 percent increase in pedestrian fatalities for the first six months of 2017 versus the first six months of 2016, whereas all other states reported a collective 5.8 percent decrease in pedestrian fatalities.”

This statistic, however, does not indicate the impact of legalization on pedestrian fatalities because many states did not legalize between the time periods cited. An appropriate analysis should examine what happens, state‐​by‐​state, at the time of each state’s own legalization.


The graphs below depict pedestrian fatalities for states that legalized recreations marijuana between 2012 and 2016. The red lines represents the year in which the state legalized. The graphs suggest no relation between legalization and pedestrian deaths. 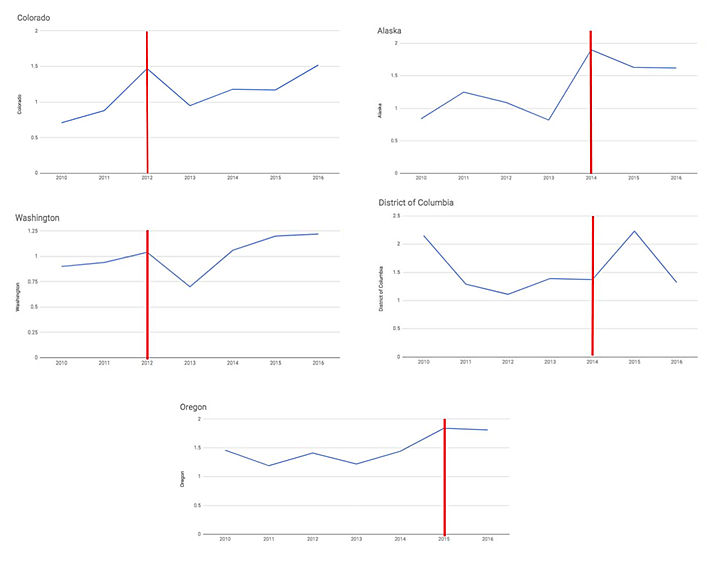 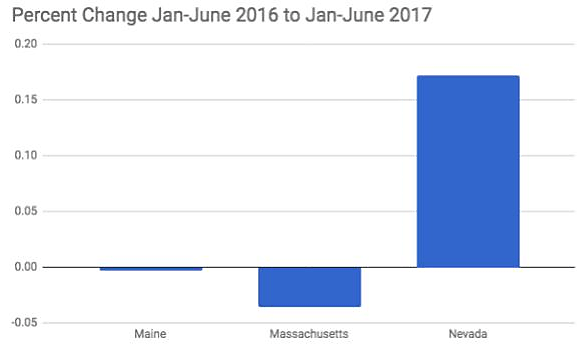 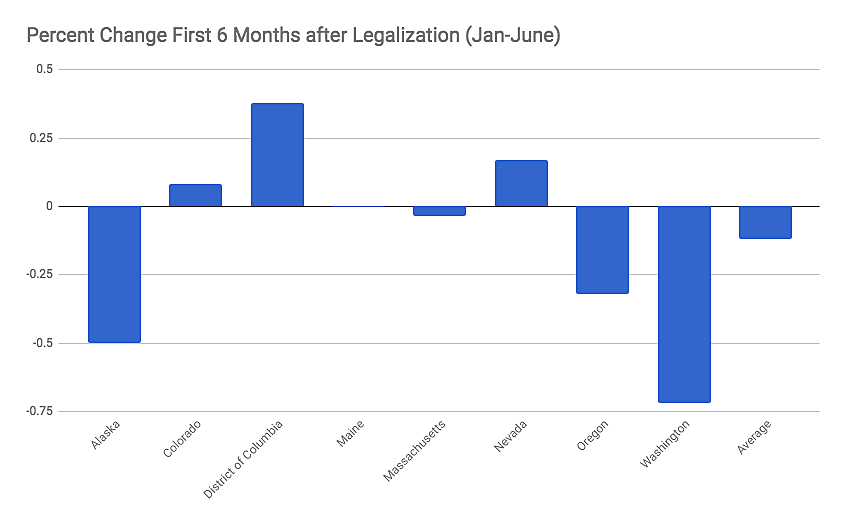 The concern about legalization and traffic fatalities is also inconsistent with several recent studies on the topic. One study, published in the American Journal of Public Health, concluded that “[t]hree years after recreational marijuana legalization, changes in motor vehicle crash fatality rates for Washington and Colorado were not statistically different from those in similar states without recreational marijuana legalization.”


Additionally, preliminary research indicates that marijuana legalization may reduce traffic fatalities. In their study of statewide medical marijuana liberalization, Anderson et al find that “the legalization of medical marijuana is associated with a 13.2 percent decrease in fatalities in which at least one driver involved had a positive BAC level.” Marijuana and alcohol are substitute goods, meaning that consumers’ preferences are often indifferent between the use of one good or the other. By allowing individuals to legally use marijuana, many choose to do so instead of using alcohol, thus decreasing the prevalence of drunk driving. Furthermore, medical marijuana legalization does not seem to result in an increase in “driving while high” deaths, for the same study reports that total “traffic fatalities fall by 8–11 percent the first full year after legalization.”

Robert Capodilupo contributed to this blogpost.