Do Free Markets Tend Toward Concentration? The Case of Banking

Perhaps the most significant difference between my own views and those of my progressive friends is on the relationship between business and government, especially “big business”. I’ve on more than one occasion heard that government needs to be there to off‐​set the power of big business. That without government, corporations would just continue to grow. Well to me that sounds like an empirical question.


Thanks to the Economic Freedom of the World report, we have some good indicators of just how free‐​market oriented a country is. What we need are measures of concentration. Unfortunately, these are a little harder to come by. Fortunately, the Office of the Comptroller of the Currency (OCC) did a survey about a decade ago (1999), the data for which are reported in Barth, Caprio, and Levine’s Rethinking Bank Regulation. The measure of concentration is the percent of deposits accounted for by the five largest banks. One could argue for a better measure, but it’s all we have.


The results? It would appear that the freer an economy, the less concentrated its banking system. The chart below offers a scatter diagram, along with a regression line. The vertical Y axis measures concentration and the X axis economic freedom (the higher the number, the freer the economy). Admittedly, the relationship is not a strong one, with a correlation of only -0.11, but it is negative. If anyone knows of comparable measures for other industries, I would encourage them to either send me the data or reproduce this analysis for other industries. 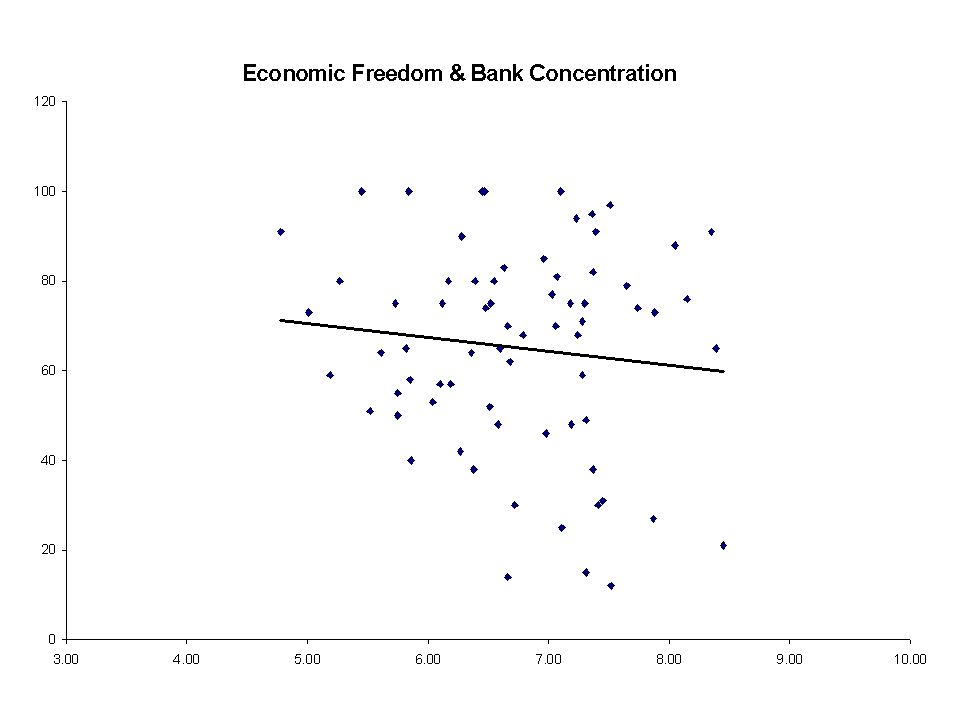