Management practices in firms differ widely between countries according to research summarized by economists Nicholas Bloom and John Van Reenen. The differences between well‐​managed firms and those that are poorly managed are significant and could help explain differences in Total Factor Productivity (TFP) between countries. In the field of economic history, economists Louis Putterman and David N. Weil (henceforth P&W) found that the length of time that a population of a country has lived with a centralized state and with settled agriculture (henceforth, Deep Roots) are powerful predictors of their GDP per capita today. Perhaps there is a relationship between firm management practices by country and that country’s Deep Roots?


P&W tested their Deep Root’s hypothesis by creating a matrix of contemporary populations of each country based on their population’s ancestral origin in the year 1500. They use a variable called state history that measures how long a country has lived under a supra‐​tribal government, the geographic scope of that government, and whether that government was controlled by locals or by a foreign power. Their second variable is agricultural history and it measures the number of millennia that have passed since a country transitioned from hunting and gathering to agriculture. P&W then combined the matrices of ancestry with the Deep Roots variables to show how long each national origin group was governed by a centralized state and how long they had settled agriculture. The Deep Roots score varies dramatically between peoples and locations. P&W’s findings stand in contrast to those that explain economic development and GDP per capita as the ultimate result of geography, institutions, or other conventional explanations.


Ryan Murphy and Alex Nowrasteh tested whether the Deep Roots variables can explain differing GDP per capita by U.S. state in a paper published in the Journal of Bioeconomics (working paper available here). They found that P&W’s core result of a statistically significant and positive relationship between Deep Roots variables and GDP per capita does not hold at the subnational level in the United States. This argument is related to immigration because new immigrants bring different state history and agricultural history scores with them, eventually affecting the Deep Roots of their new country. Whether that matters for economic growth is up for debate.


We found precisely nothing interesting related to the Deep Roots (Table 1). Neither state history nor agricultural history is correlated with better management practices. However, economic freedom and absolute latitude are positively correlated with state history and agricultural history. On the positive side, our R‐​squared is 0.72, so the variables that we included can explain 72 percent of the variation.


There are a lot of reasons why this could be. We only had management score data for 34 countries, collinearity was rampant, cross sections are limited, or other explanations that we haven’t considered. Regardless, there is no evidence here that there is a link between Deep Roots and firm management practices. 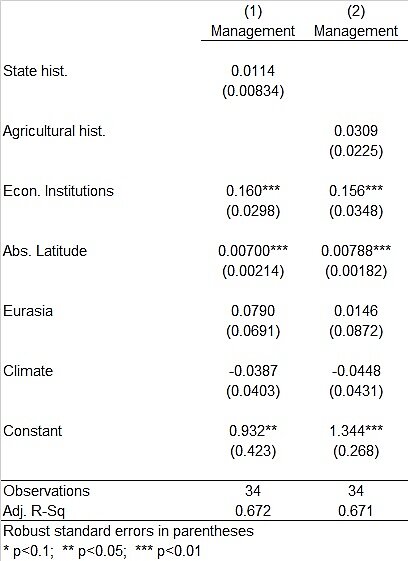